Home » Destinations » The Best Itinerary For Two Days In Milan

Ahhh Milano! One of the fashion capitals of the world, a coffee lover’s dream, and a must on your cities in Italy to visit. I’ve been to Milan twice now – once while I was studying abroad in Florence and a second time just recently on a Europe trip with my sister! We flew from Iceland into Milan on a…wait for it…. $27 Wizz Air flight. Yup, you heard that right. A 4-hour international flight for $27 each! We only spent two days in Milan, but that felt like plenty of time to see the highlights of the city. So, without further ado, here’s an itinerary for the top sights to see during two days in Milan. 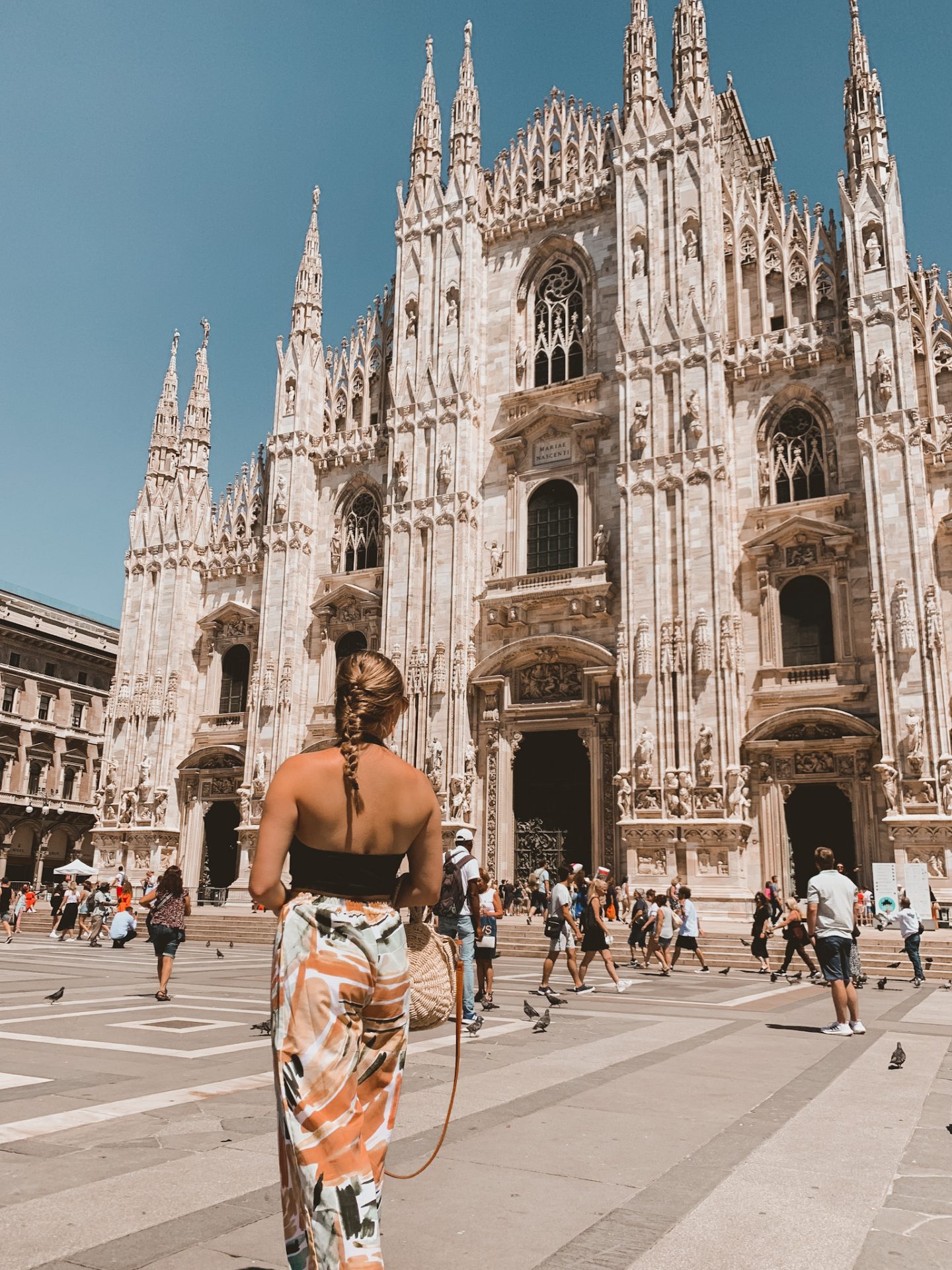 What To Know Before You Go

Italy is part of the EU, so the Euro is the currency used. Credit card is widely accepted but be sure it has contactless payment abilities or at least a chip.

The primary language spoken in Milan is Italian, however English is widely spoken. You can also find German and French throughout due to the city’s proximity to the Swiss border.

The tap water in Italy is drinkable. In Sicily, it may have a bit of a metallic taste due to nearby Mt. Etna, but the water is potable throughout the country, so be sure to pack your reusable water bottle for this two day trip in Milan.

Since Milan is a major city in Italy, cell service shouldn’t be a problem. If you’re staying for an extended period of time, I recommend a phone plan. I’ve used Vodafone before which is common in Italy and all throughout Europe.

I can’t say enough good things about the metro in Milan. My sister and I used it several times throughout our visit to navigate from the airport, to our hotel, and into the central downtown. The main train station in Milan is the Milano Centrale. From here, you can take the M2 metro right to the Duomo square or to other major attractions within the city.

Pro-tip: Not staying for long? Store your luggage in the Milano Centrale! This is what my sister did between our hotel checkout and our evening train ride. It cost 6 Euro per person, and it was safe for hours! Just follow the “Left Luggage” signs throughout the airport to find the luggage storage room. Just note, when you go back to pick up your luggage later on, be sure to arrive early before your train. There was a bit of a queue when we were here – I think a lot of other travelers had the same idea.

I recommend taking the M2 from the central station to the Duomo to begin your visit. Once you’re at the Duomo, most of the sites listed here are easily walkable from one another. You can see a map of the popular walking route below.

Milan has three nearby airports. This is an important distinction to make when you’re looking to book flights here. The main, international airport is the Milan Malpensa Airport (MXP), located in a suburb about 30 miles northwest of Milan. This airport services thousands of flights from around the world and conveniently has a train system you can utilize to get into the city center. By taxi or car, the Duomo (city center) is about 45 minutes away.

This airport is closest to the city center and serves mostly flights from within Italy. Avoid this airport if you’re looking to fly internationally. From Milan’s train station, a taxi here would take only 20 minutes. Milan Linate Airport serves more than nine million passengers per year, most of them flying on Alitalia flights within Italy, such as the popular Rome – Milan route.

Bergamo (BGY) is located well outside Milan but is a busy hub for flights going to and from other points in Europe and the UK. It’s a popular option if you’re flying a budget carrier or heading to the Alps. 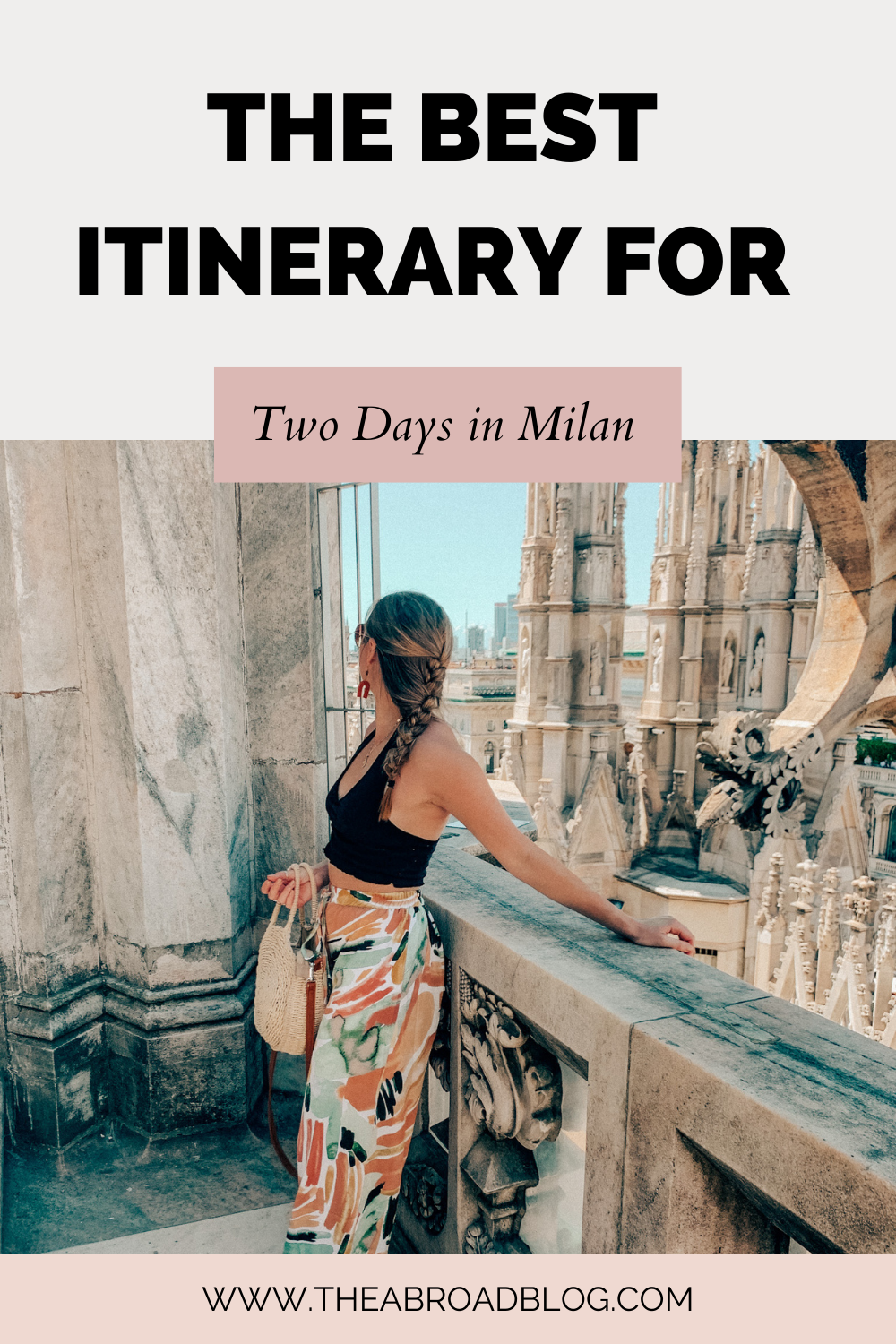 Top Sights To See In Milan In 48 Hours

Don’t judge me for starting with this one. Although it’s not authentic to Italy, it is a sight worth seeing! There are only a handful of Starbucks Reserves located around the world, and since this is the only one located in Europe, I recommend you add it to your list.

Fun Fact: There are 5 others. They’re located in New York, Chicago, Seattle (I’ve been to all three of these!), Tokyo, and Shanghai.

If you’re unfamiliar with Starbucks Reserve, it’s basically a giant Starbucks specialty restaurant and coffee factory. The baristas brew their coffee on-site with small-lot beans, there’s unique menus featuring more gourmet food options, and merchandise is usually sold. Since Italy is one of the coffee capitals of the world, this one is extra special. Plus, it’s located in the same square as the Duomo, so you really can’t miss it. 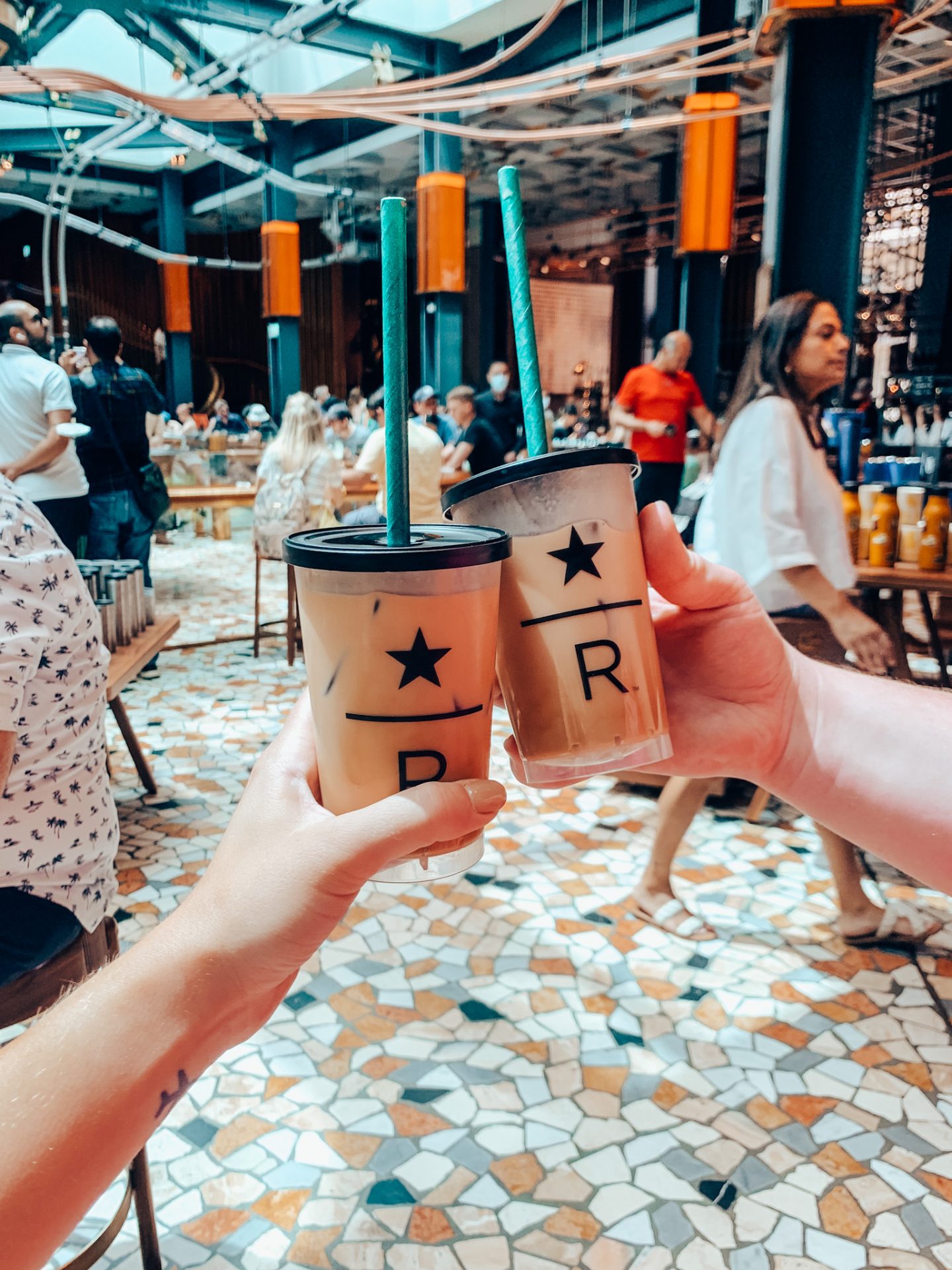 This brings me to my next suggestion, and the one you REALLY can’t miss! The Milan Cathedral, better known as the Duomo di Milano, is one of the most impressive cathedrals in Europe. Dedicated to the Nativity of St. Mary, this cathedral took nearly 6 centuries to complete. Construction began in 1386 and the final details were wrapped in 1965… how wild is that. This duomo is impressive for many reasons, but most importantly because… 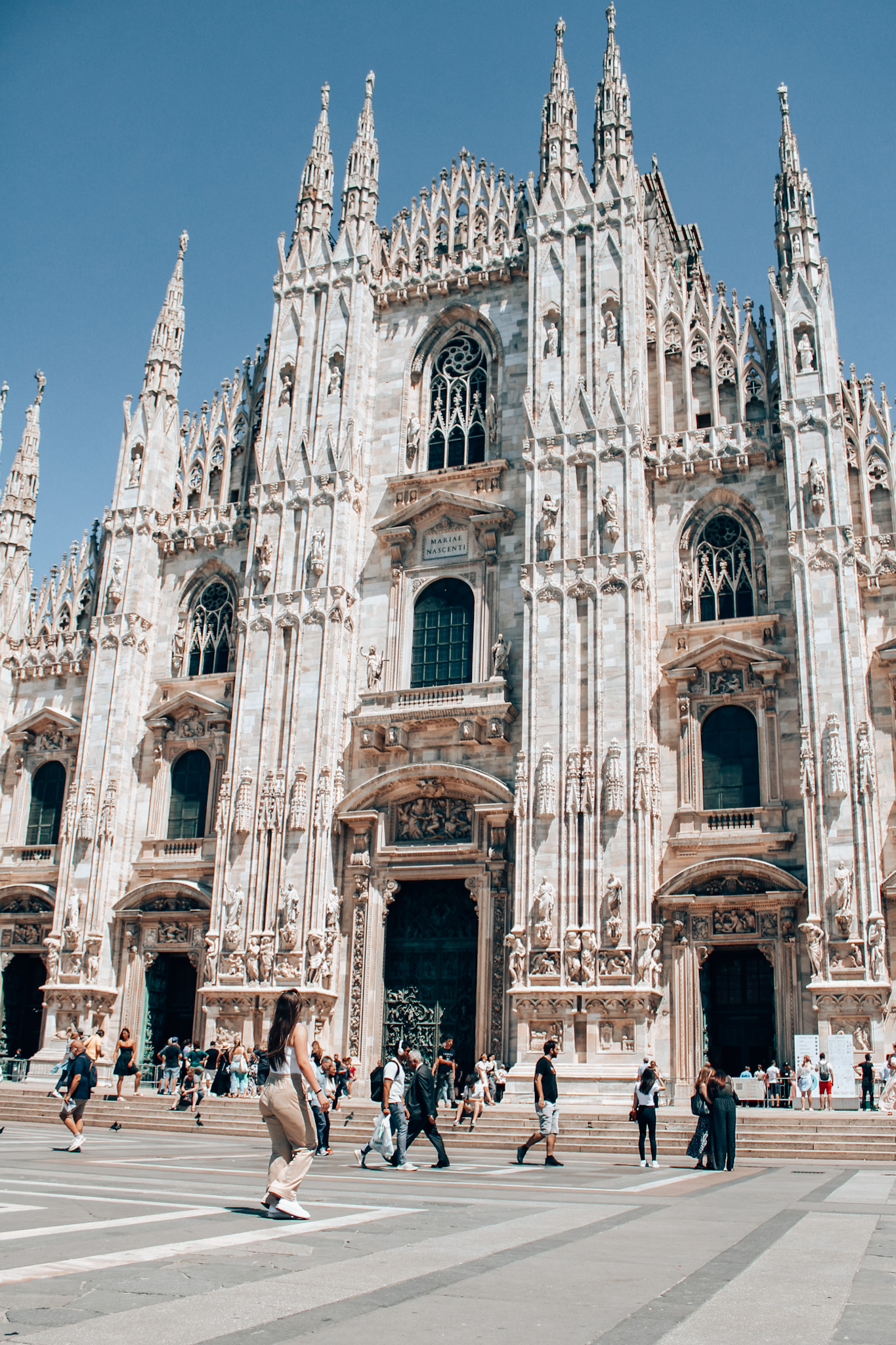 It would be wrong to just talk pictures of the outside of this cathedral. The inside is totally worth buying a ticket for, along with the roof! I didn’t go to the roof the first time I visited and am so glad I did the second time around. It’s like a maze up there. 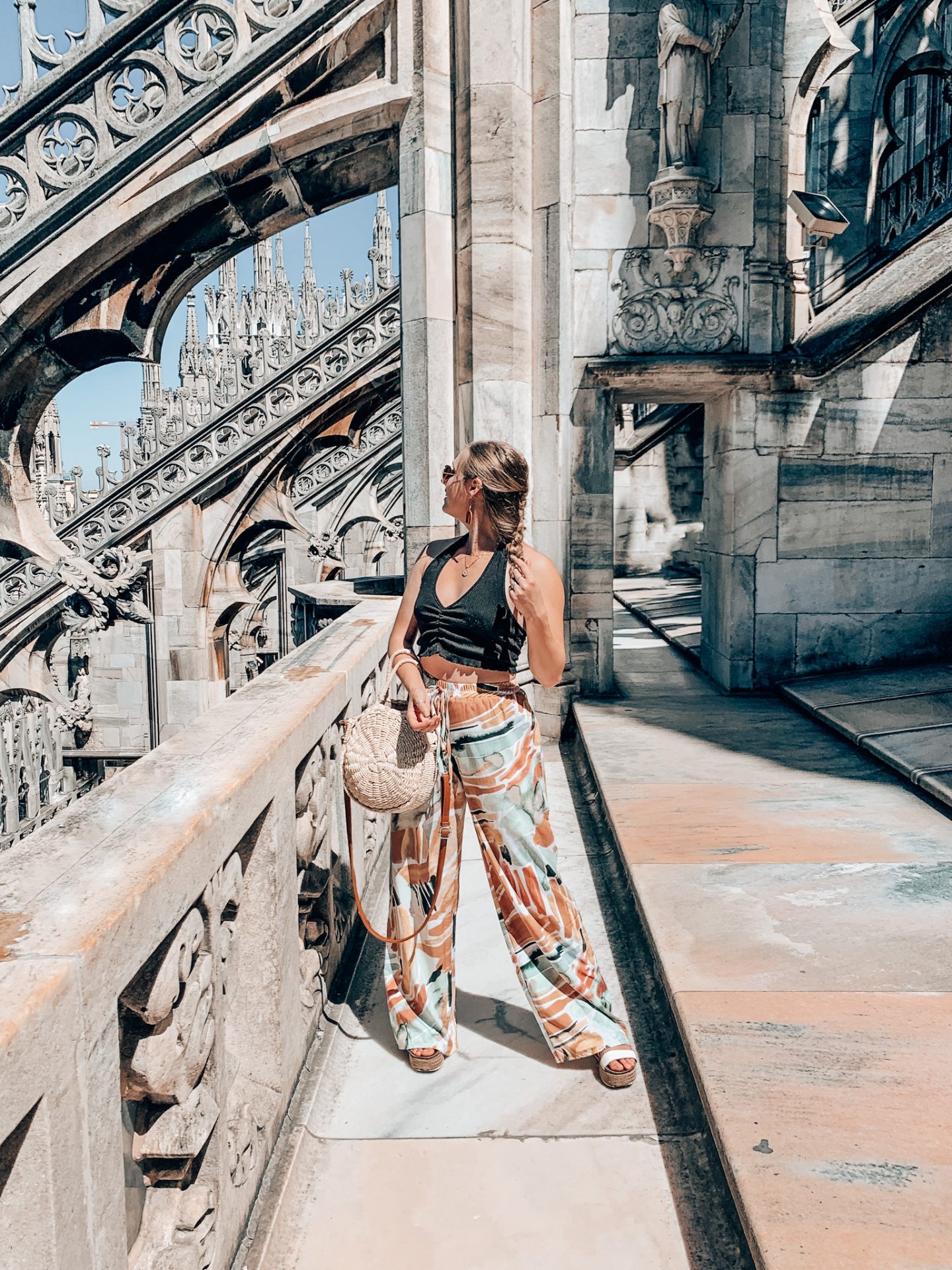 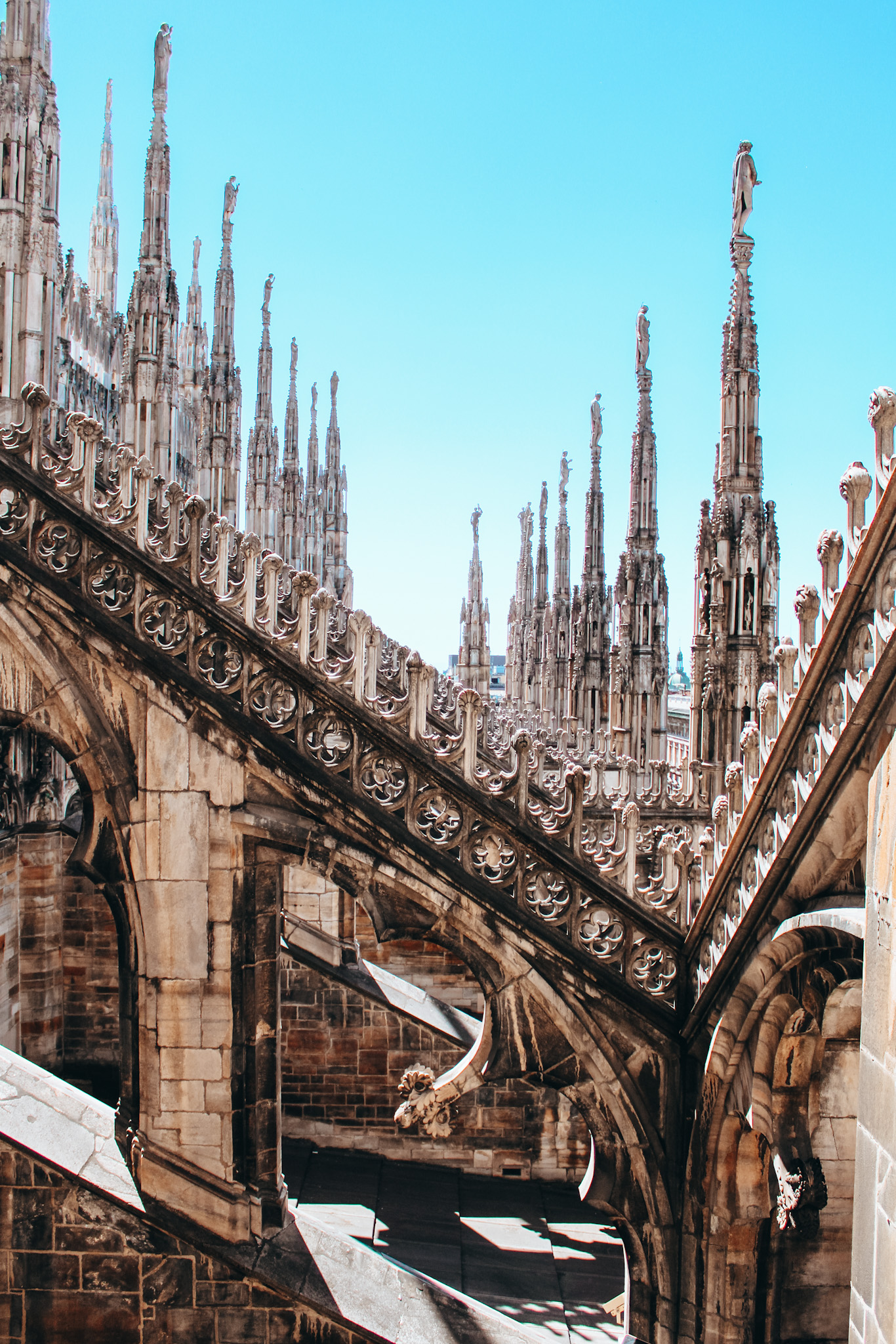 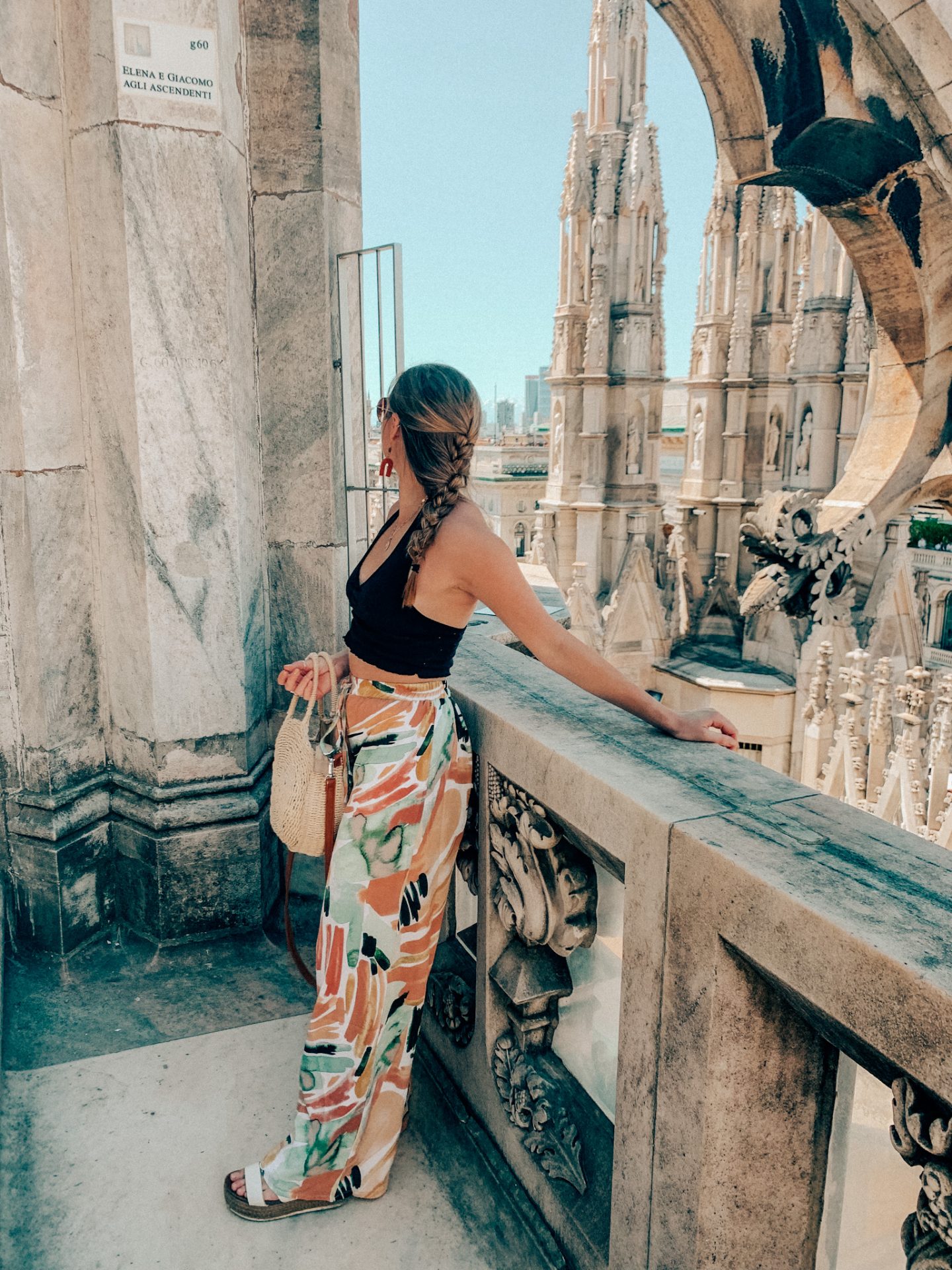 Pro-tip: As always, I recommend reserving tickets online and in advance for your visit. It can get quite busy in there. Also, be sure to cover your shoulders and knees if possible. If not, you’ll have to rock a disposable smock like my sister and I. 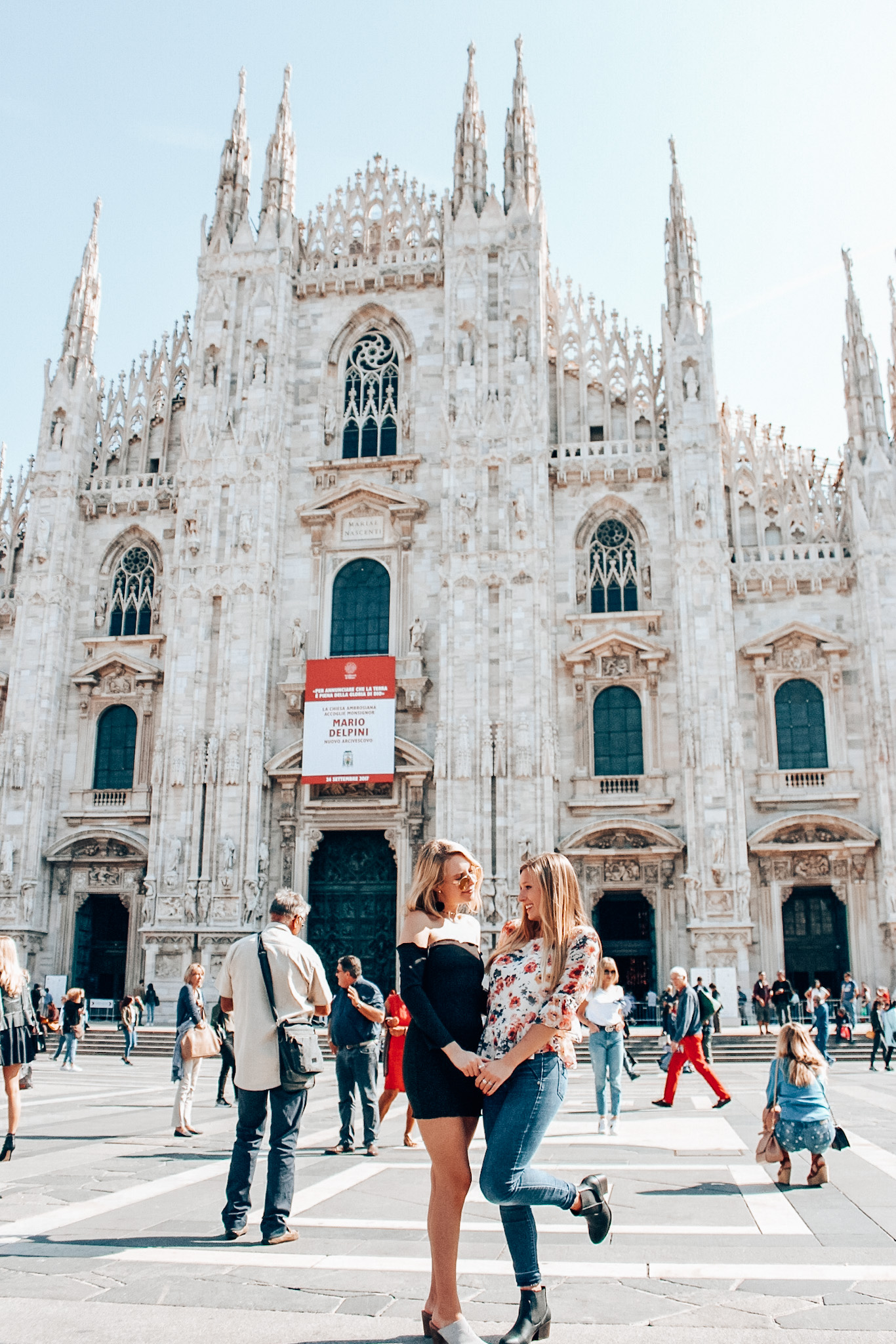 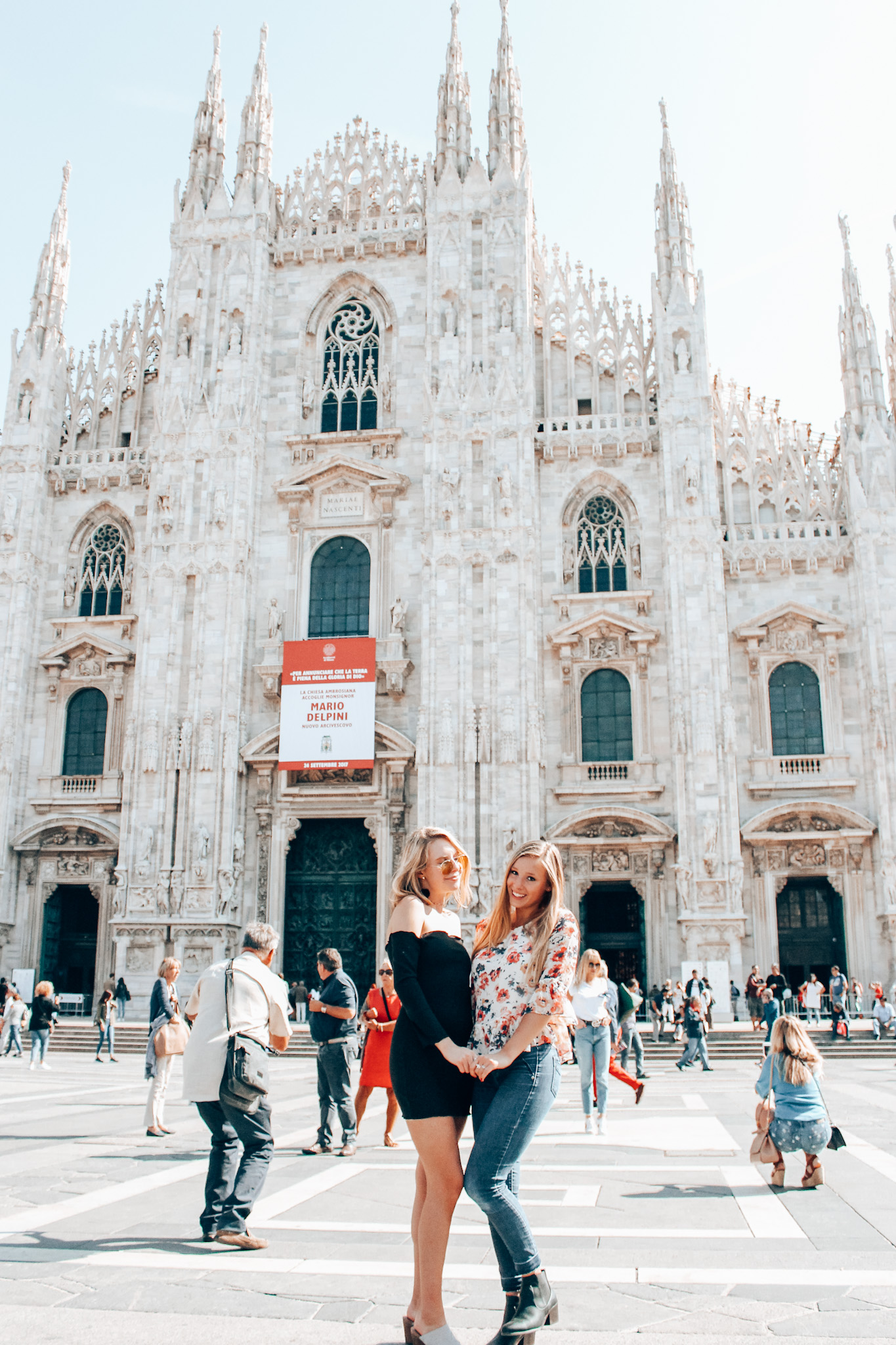 Located adjacent to the Duomo in Milan, this is Italy’s oldest active shopping gallery and is one of Milan’s most popular landmarks. It has a picturesque four-story double arcade and tons of shops – most of which are designer brands. It was designed in 1861 and built between 1865 and 1877. Be sure to walk through here during your two days in Milan! 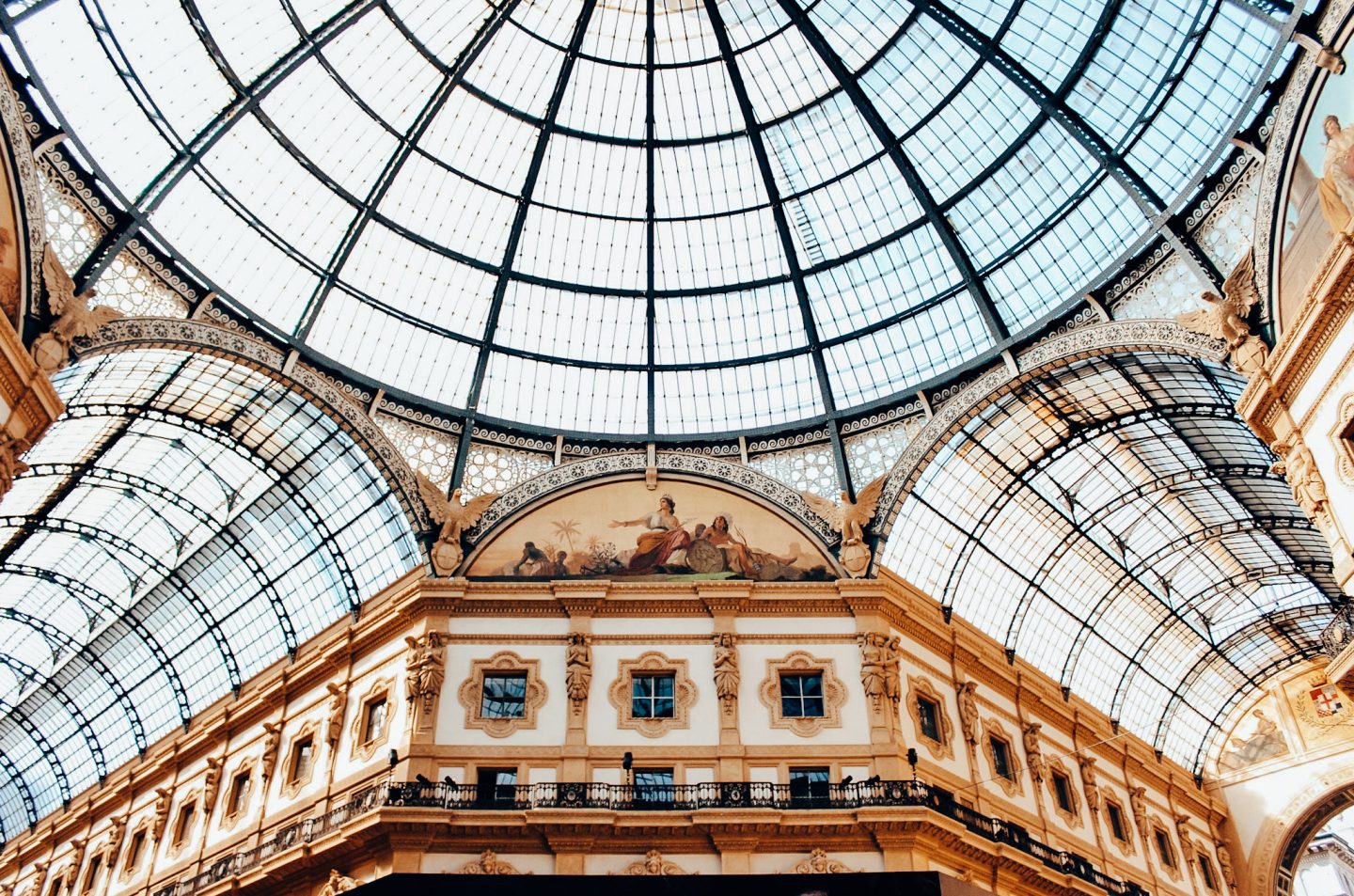 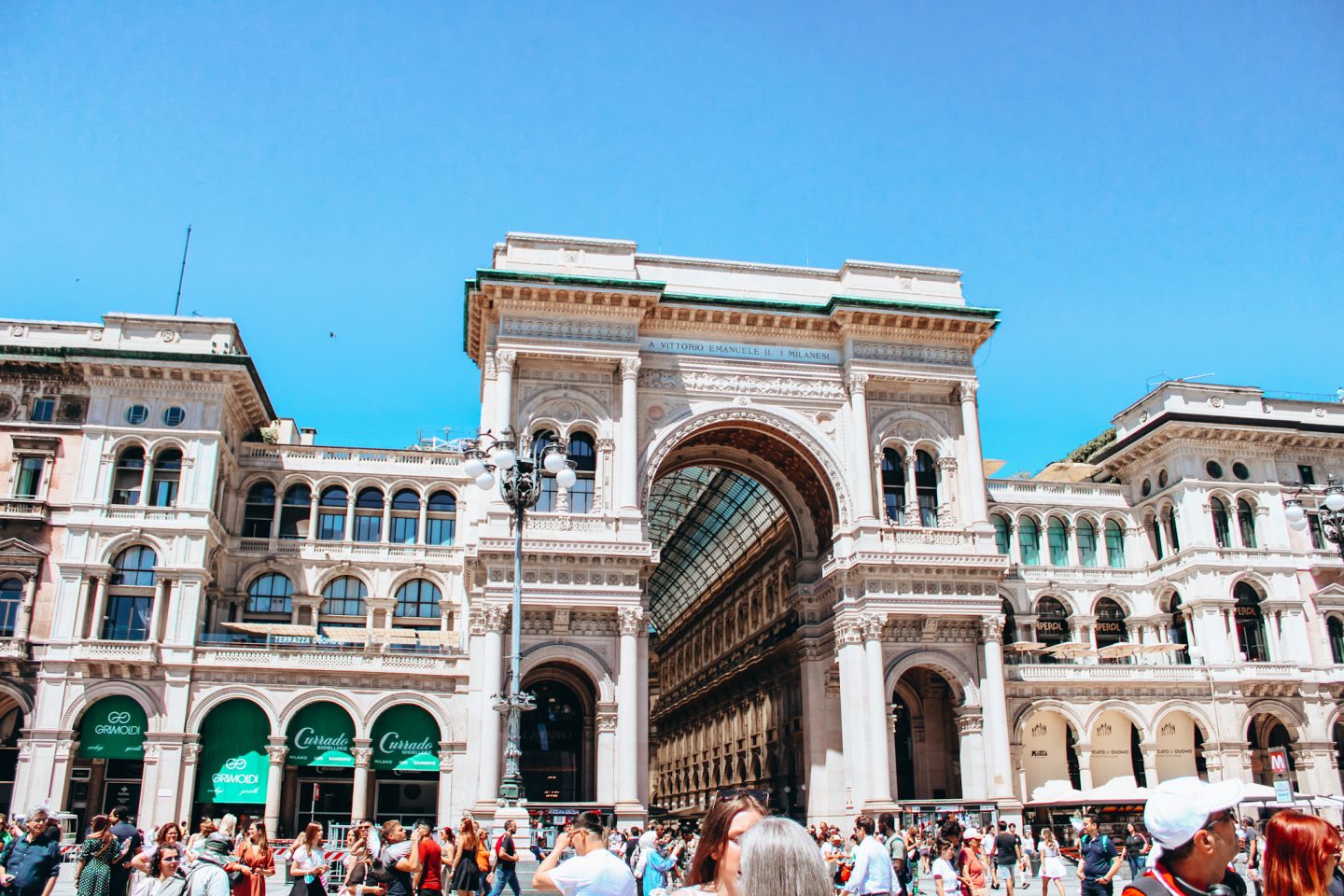 This is where you can find the mural painting of the Last Supper by Leonardo da Vinci. Buy tickets for the Museum of the Last Supper online and in advance for your visit! If you’re interested in art history, this is an absolute must.

Translated to “Sforza’s Castle” in English, this medieval fortification located in northern Italy was built in the 15th century by the Duke of Milan. It was once one of the largest citadels in Europe and now houses several of the city’s museums and art collections.

Pro-tip: Try to visit Milan during Fashion Week in September if you can! This is what I did when I first visited during my semester abroad and I couldn’t recommend it more. The city is so full of life. We actually were able to see a runway show at this fortress… how cool?! 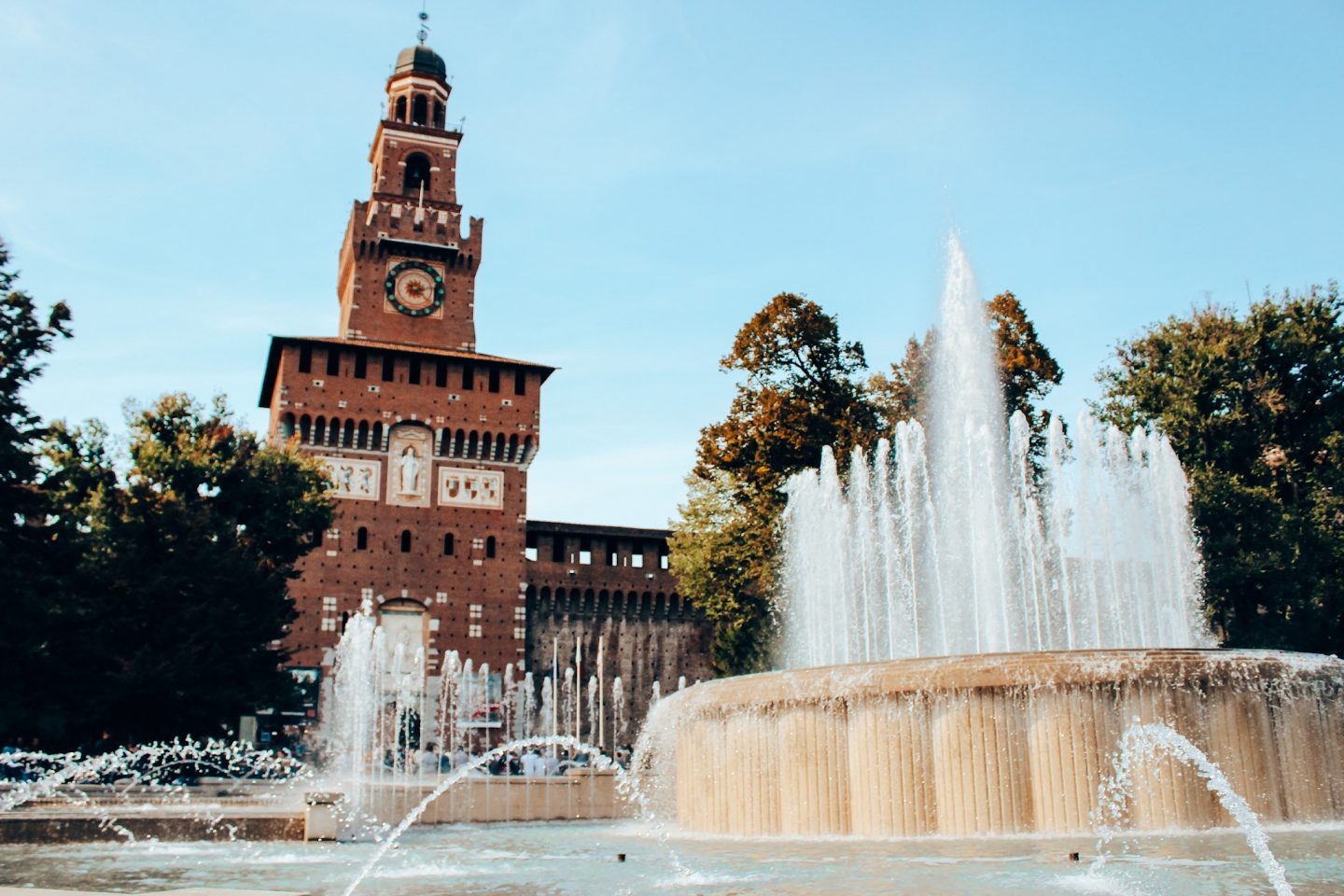 That’s all for my short and sweet Milan guide! As always, I hope this post helps you plan the trip of your dreams. Enjoy your two days in Milan and feel free to leave any questions in the comments below. Ciao for now! 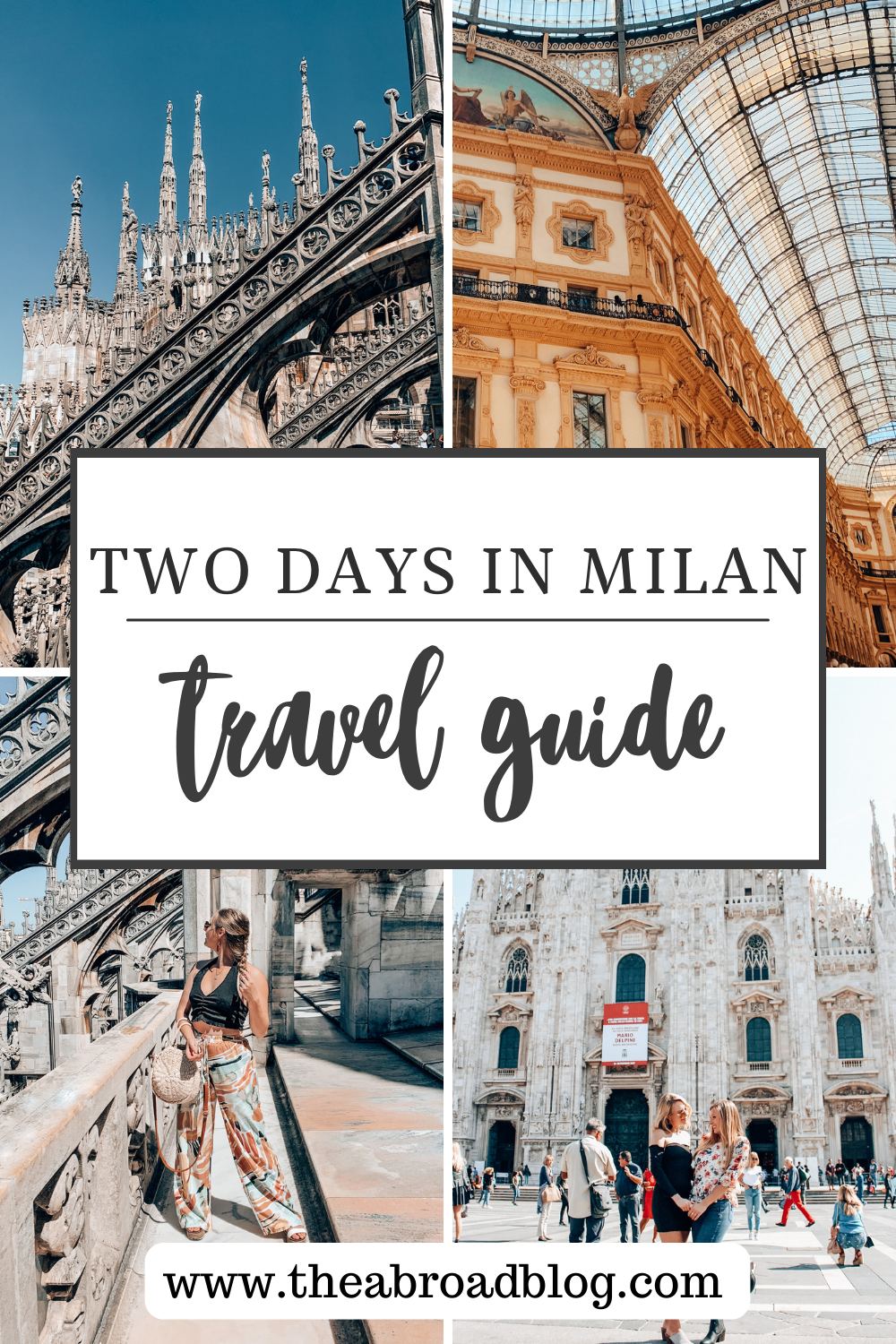