Home » Destinations » What To Do In Iceland: 8 Must See Sights & Travel Tips

If you’re flying from North America to continental Europe, consider flying through Iceland! Although it’s a bit north, it’s pretty much geographically situated in between the US / Canada and Europe, making it the perfect place to stop in, stretch your legs, and explore a bit! This blog post covers everything you need to know before visiting, plus highlights what to do in Iceland!

Disclaimer: This blog post is in partnership with GetYourGuide. GetYourGuide is one of the leading online travel agencies and marketplaces for tour guides and excursions. They operate tours and activities all over the world. I work closely with the GetYourGuide community and was able to enjoy a day in Iceland in exchange for content on my blog and Instagram (@Nicole.rosania). You can find a link to the exact tour we did throughout. As always, all opinions written below are my own.

What To Know Before You Go

I’ve included this section in multiple of my past blog posts, but I decided that moving forward, I want to include this section in every destination post on my site! It will include a run-down of the “basics” of the place, including currency, language, some packing tips, etc. I hope this quick read section is especially helpful for those of you planning an upcoming vacation of your own. Without further ado, here’s what you need to know before you go to Iceland…

The currency in Iceland is the Euro, as Iceland is an official member of the EU. Be aware that compared to most other European countries, Iceland is quite expensive. Credit card is accepted throughout the island although cash may be needed for taxis. Most countries in Europe utilize a tap credit card, but chip is fine too.

Almost everyone in Iceland speaks English but the native language is Icelandic. It’s one of the most complicated languages in the world to speak and understand but try to learn a word or two before you go! Here’s your start: “Hello” in Icelandic is Halló.

Iceland has some of the freshest, cleanest glacier water in the world, so ditch the plastic water bottles and pack a large reusable water bottle for this trip. Assuming you’ll be quite active depending on what you do in Iceland, it’s important you stay hydrated.

Iceland is CHILLY. Even during peak summer months, the temperature barely rises above the low 70s (23° Celsius). During the winter months, Iceland is well, icy. Pack your warmest puffer, hat, gloves, and layer up. During the summer I also recommend layering. Pack some light long sleeves, t-shirts, and maybe a sweater or two for the evenings. Iceland is far from a tropical destination, but don’t forget a bathing suit for the Blue Lagoon!

I just talked about the temperature, but something else to know about Iceland is it’s extremely windy! Also, if you visit during the summer months, expect to experience the Artic Sun! Since Iceland is partially located within the Arctic Circle, the sun rarely sets during the summer months. We landed at 4 am and the sun was out and when we took off at 9 pm later that day, it looked like the middle of the afternoon. Maybe pack a sleep mask if you think this will bother you. Likewise, during the winter months, Iceland only experiences a few hours of sunlight. A local told us their shortest day sees only 4 hours of sunlight. The perk of this? Northern Lights baby – definitely a top suggestion for your “what to do in Iceland” search.

Iceland is quite barren. You’ll see. Stretches of it looks like Mars. Because of this I would expect spotty cell service. There’s WiFi in all hotels and cafes throughout Reykjavik but be prepared to be off the grid for most of your visit.

As mentioned above, most regions in Iceland are quite desolate. Reykjavik is quite walkable if you’re based there, but if you choose to explore outside of it (which you totally should), I recommend renting a car. A lot of people opt to see Ring Road by car or camper van, which can take up to 5-7 days. If you’d prefer to stay in the southwest region of the island, the Golden Circle is a much smaller loop that can be done via coach bus.

Pro-tip: There’s a shuttle bus system that can bring you from the KEF international airport into downtown Reykjavik. It costs about ~$20 per person for the 50-minute trip. It had WiFi, was quite comfortable, and much more affordable than a taxi.

My sister and I were only in Iceland for one (very) long day on our way from Boston to Italy, meaning our bedroom for the night was a Wizz Air flight. I don’t really recommend this unless you’re on a budget and can sleep on flights. If you’re hoping to stay in Iceland, I definitely recommend basing yourself in Reykjavik for a few nights before heading out and about. My friend Hayley (blog linked HERE!) visited Iceland twice last summer and raves about the Center Hotels. They have multiple locations throughout the city, so definitely check them out. When you’re out and about, expect to find hotels at major attractions, such as the Geyser Hotel near the Geysir Hot Spring area. Camper vans and RV rentals are also super common here.

Iceland isn’t known for its food. Our tour guide was very transparent about this – boiled shark? Pass. But Reykjavik is scattered with several adorable coffee shops, bakeries, and cafes that are worth visiting. I don’t have any dinner recommendations for you since we weren’t here for long, but you MUST visit Braud (Bread & Co) bakery during your time in Iceland. The workers here are some of the friendliest people I’ve met, they strongly encourage videos and photos as they work, and their pastries were TO DIE FOR. Try the homemade cinnamon bun. It’s one of the best things I’ve ever had. Kaktus Espresso Bar is another super cute coffee shop for cappuccinos and lattes in the city. 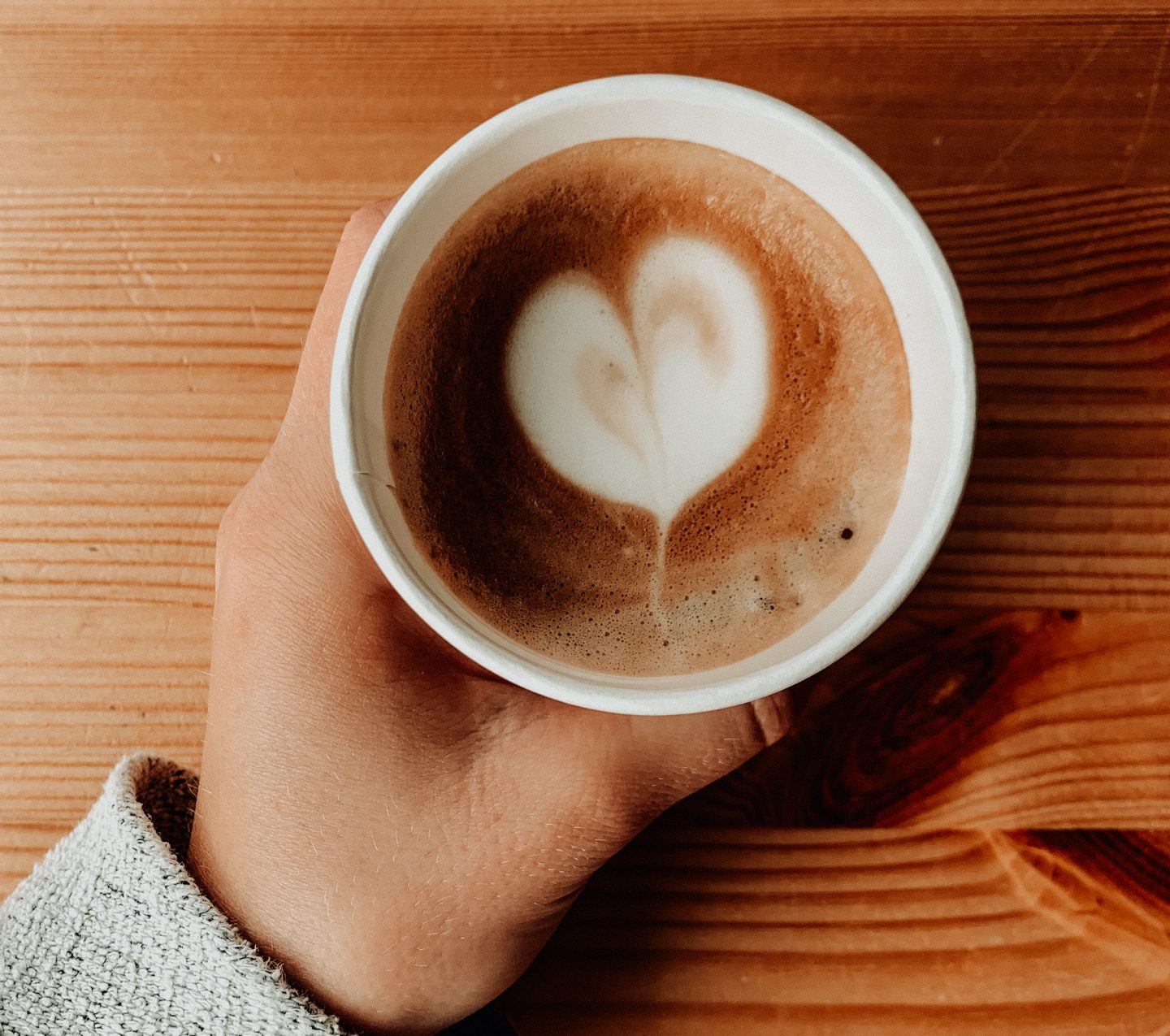 And now for the most important section of them all: what to do in Iceland! This list by no means encompasses all the major sites on the island, as my sister and I just toured a small portion of the southwest corner. However, this area is the most visited in Iceland, so these are definitely some of the can’t miss highlights.

Reykjavik is a fairly small capital city. For this reason, it’s easy to explore most of it on foot in just a day or two. The most iconic site in the city center is definitely the Hallgrimskirkja Church. This church has to be one of the most unique ones I’ve ever seen. Inspired by Icelandic Nordic traditions and built in 1986, this Lutheran church is the tallest in Iceland (73 m high). 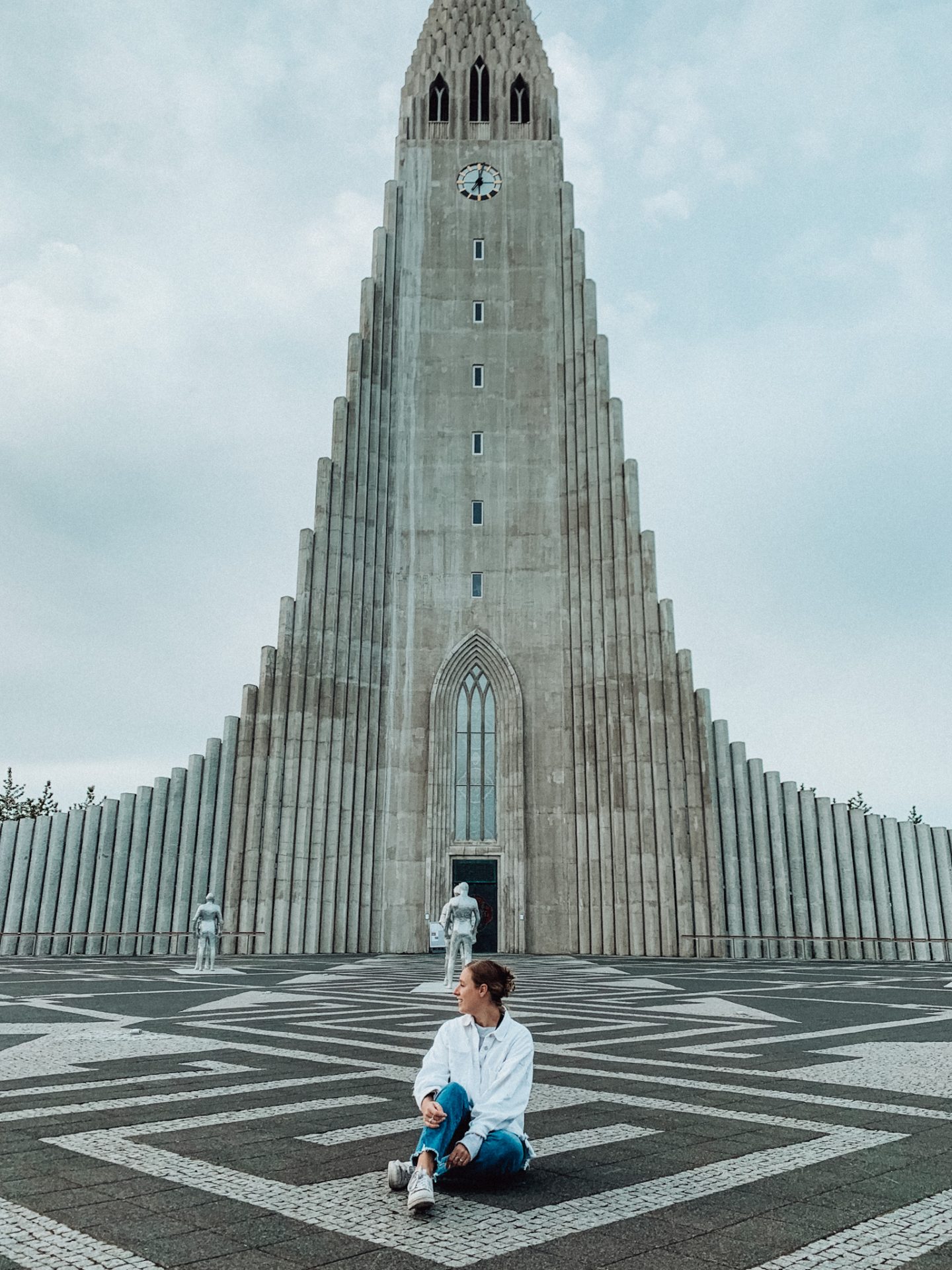 Known as the “Heart of Iceland”, this is one of Iceland’s many national parks and is the one located within the Golden Circle. It’s less than an hour drive from downtown Reykjavik, meaning it shouldn’t be missed on your list of things to do in Iceland. Not only is this national park and UNESCO World Heritage site known for its geological sites and natural rivers, but it also has a lot of history as well. “Thingvellir” in Icelandic means “Assembly Plains” as the governing assembly of Iceland was established here in 930 A.D. and continued to convene at this site until 1798. 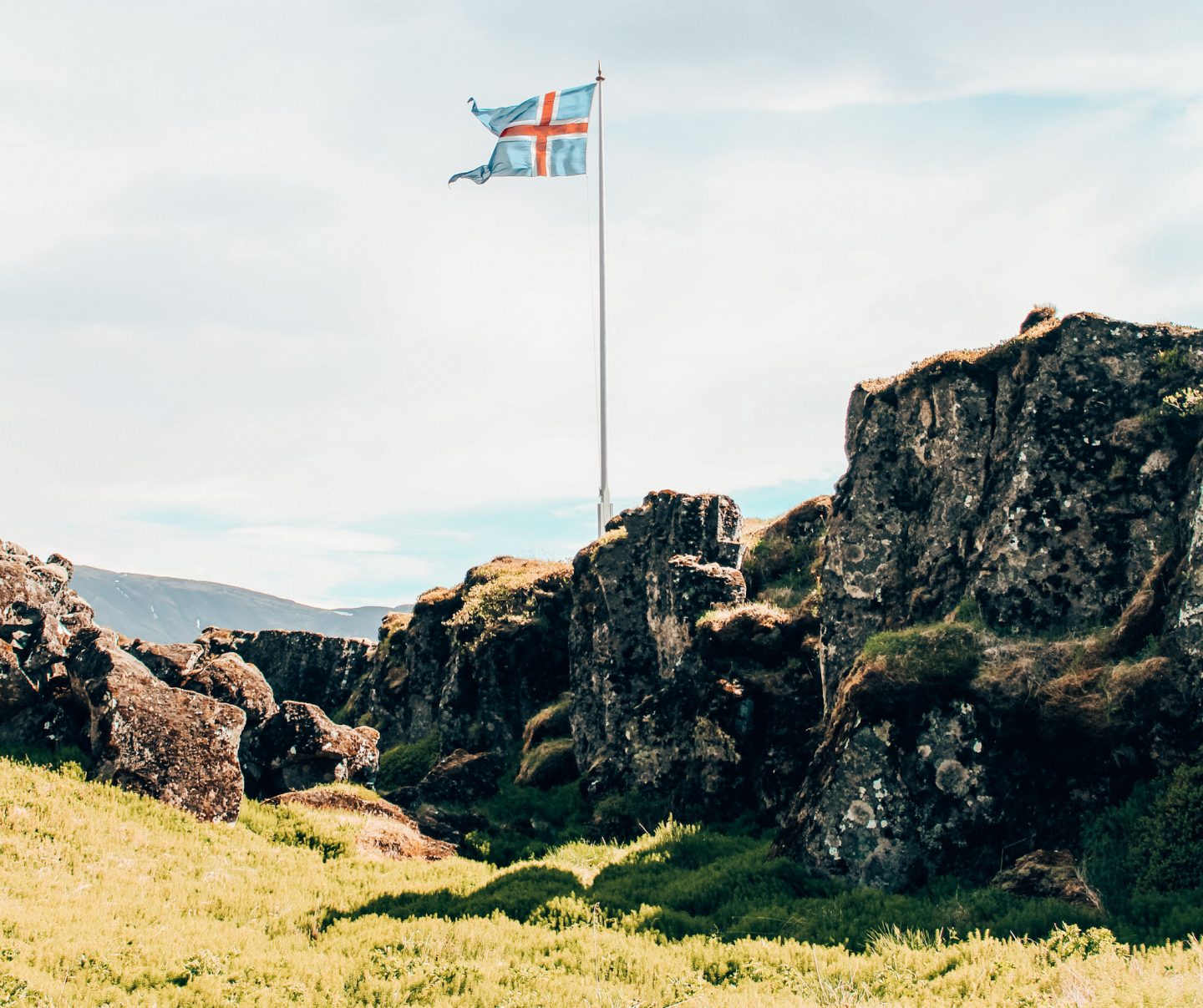 When looking up what to do in Iceland, Gullfoss Waterfalls is sure to fall at the top of your list. Translated to “Golden Falls”, this series of waterfalls is one of Iceland’s most iconic. It’s also located in the southwest within the Golden Circle and will definitely be covered in any day tour. Water from the Hvítá River cascades down in two stages in a dramatic display of nature’s raw power. A canyon surrounds the waterfall, which was believed to be formed by glacial outbursts during the Ice Age. There are multiple viewpoints here to enjoy, although I highly recommend hiking down to the base of the falls for photos. 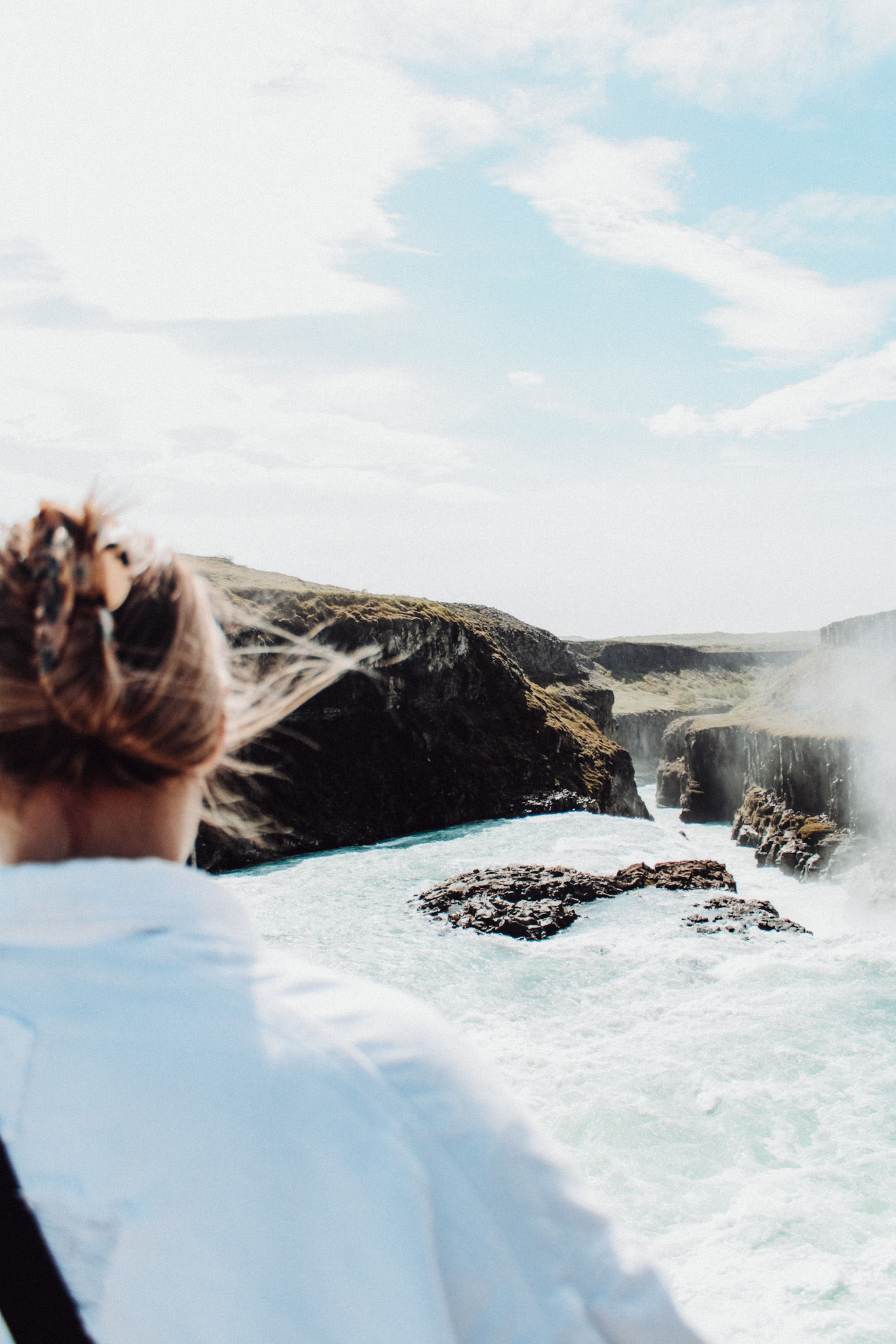 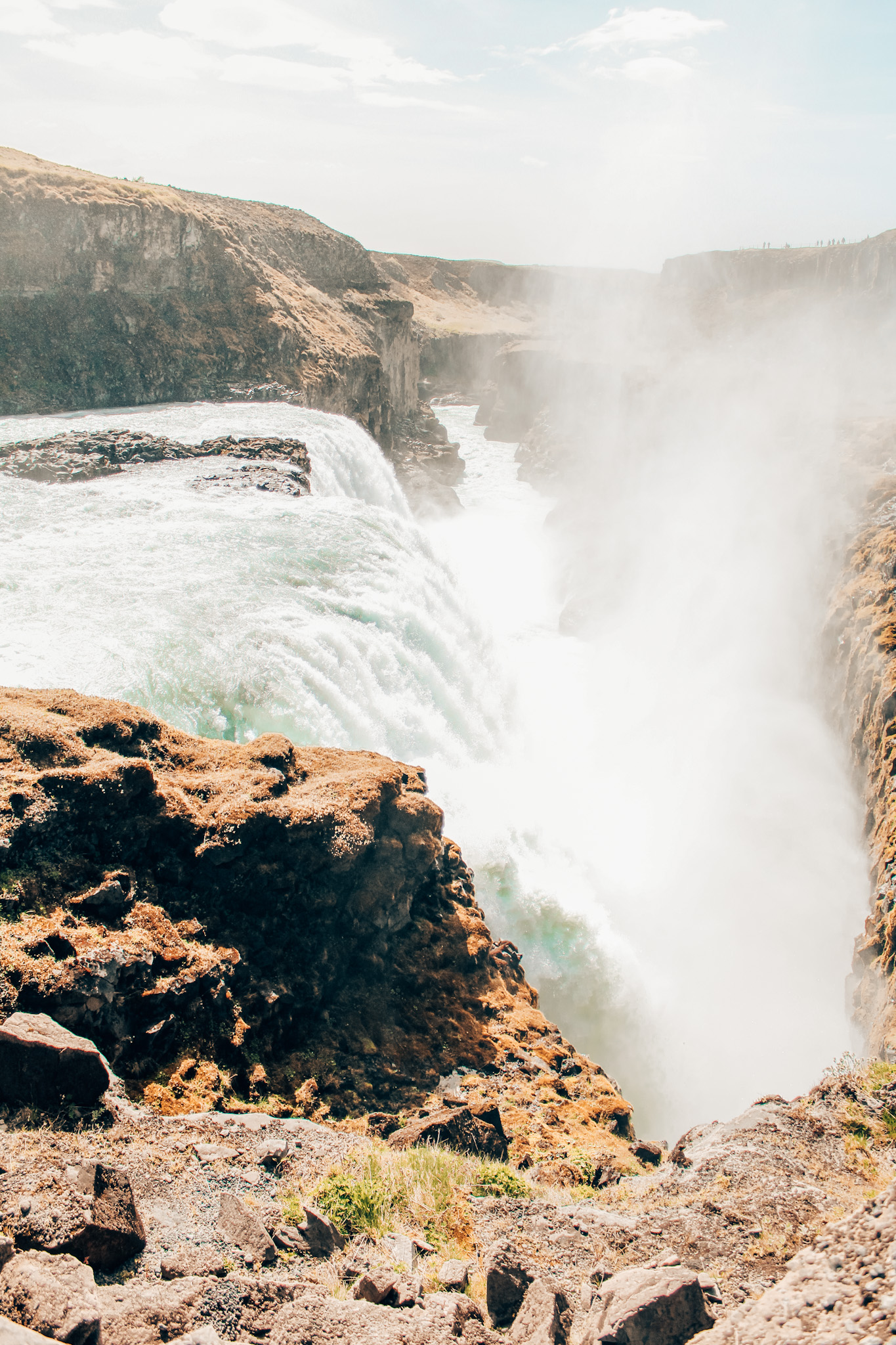 This one isn’t a specific spot to visit, however Icelandic horses are really cool. Cool enough to make this list clearly! Our GetYourGuide tour was nice enough to drive us through a farm with a local wool shop on our way to the geysers to see the horses. They are so majestic up close and have some of the craziest hairstyles I’ve ever seen. 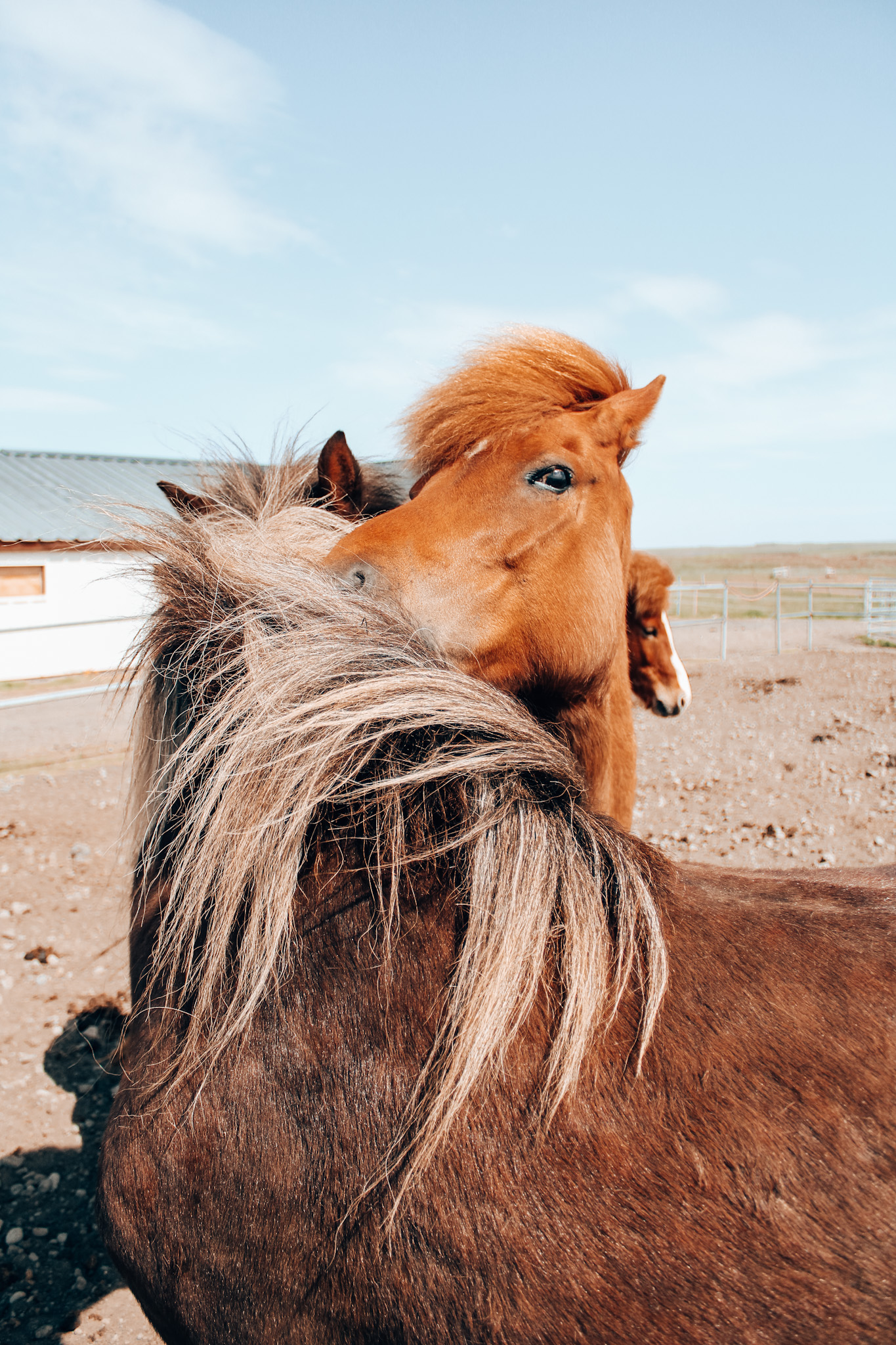 This was also a detour for us on our day tour, and I’m SO glad it was. Faxi is located on the Tungufljót river and is a wide waterfall with a short drop. You don’t have to hike to get a view of the falls, as there is a viewing platform on the roadside. 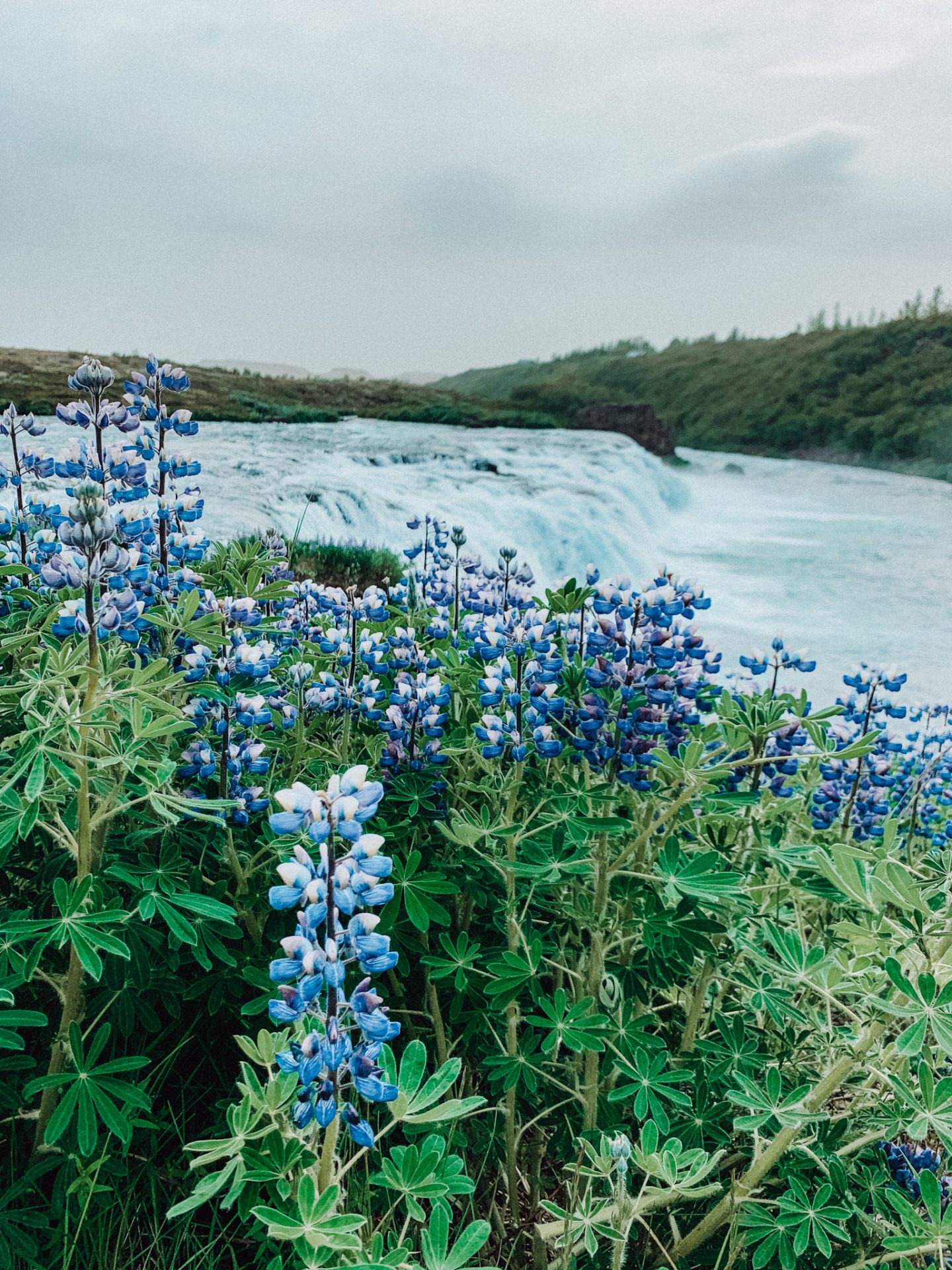 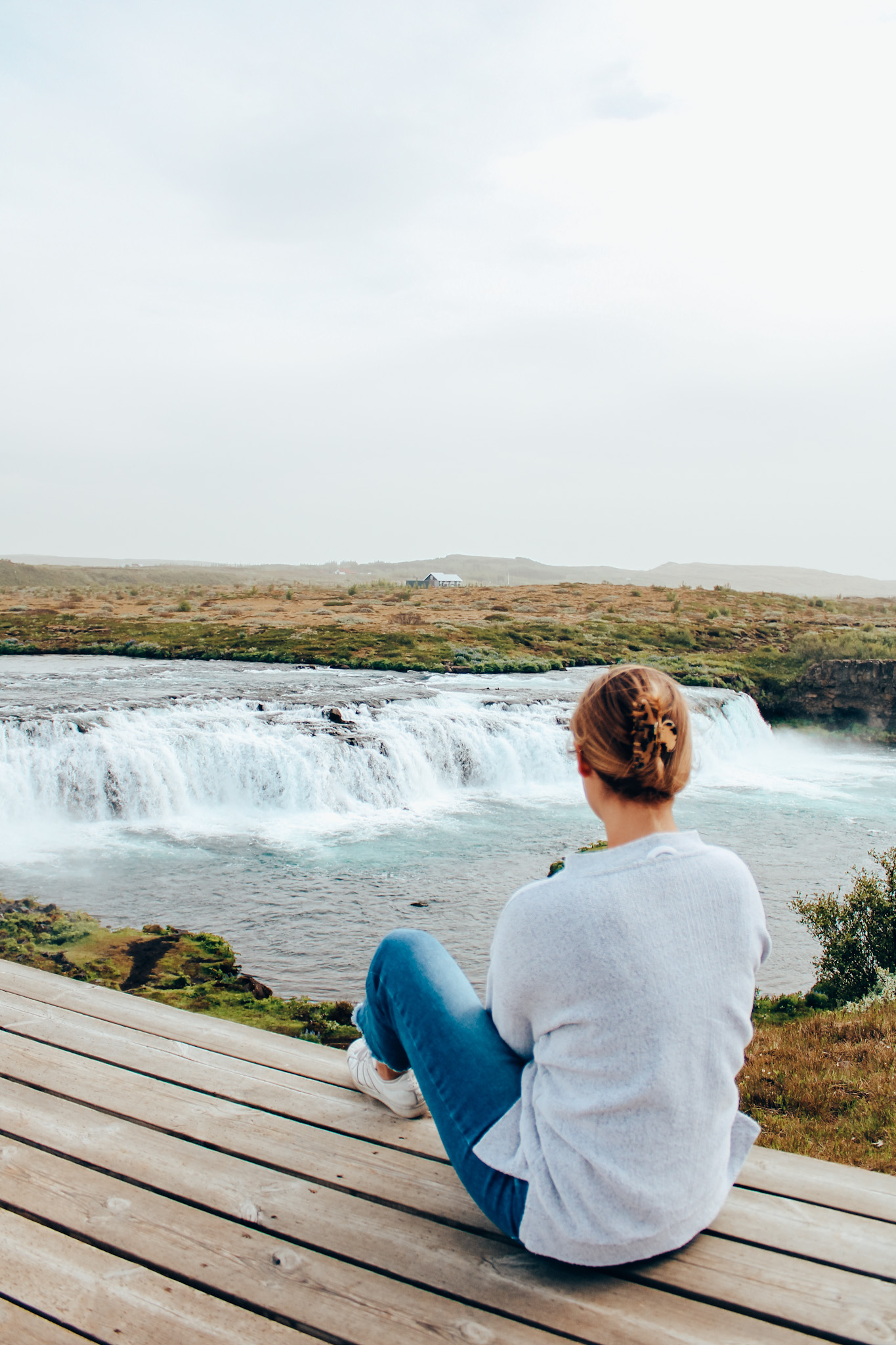 This active hot spring area stretches for 1.1 square miles and is home to the Strokkur Geyser – the most active geyser in the world. For context, it erupts every 7-8 minutes while it’s distant cousin, Old Faithful, only erupts every 30 or so. This area first became active more than 1,000 years ago and consists of more than a dozen hot water blow holes. The Great Geysir is the most popular geyser here but isn’t very active.

Pro-tip: As remote as this site sounds, you’ll be able to find a fabulous food court here, along with a restaurant, bathrooms, gift shop, and even a hotel. 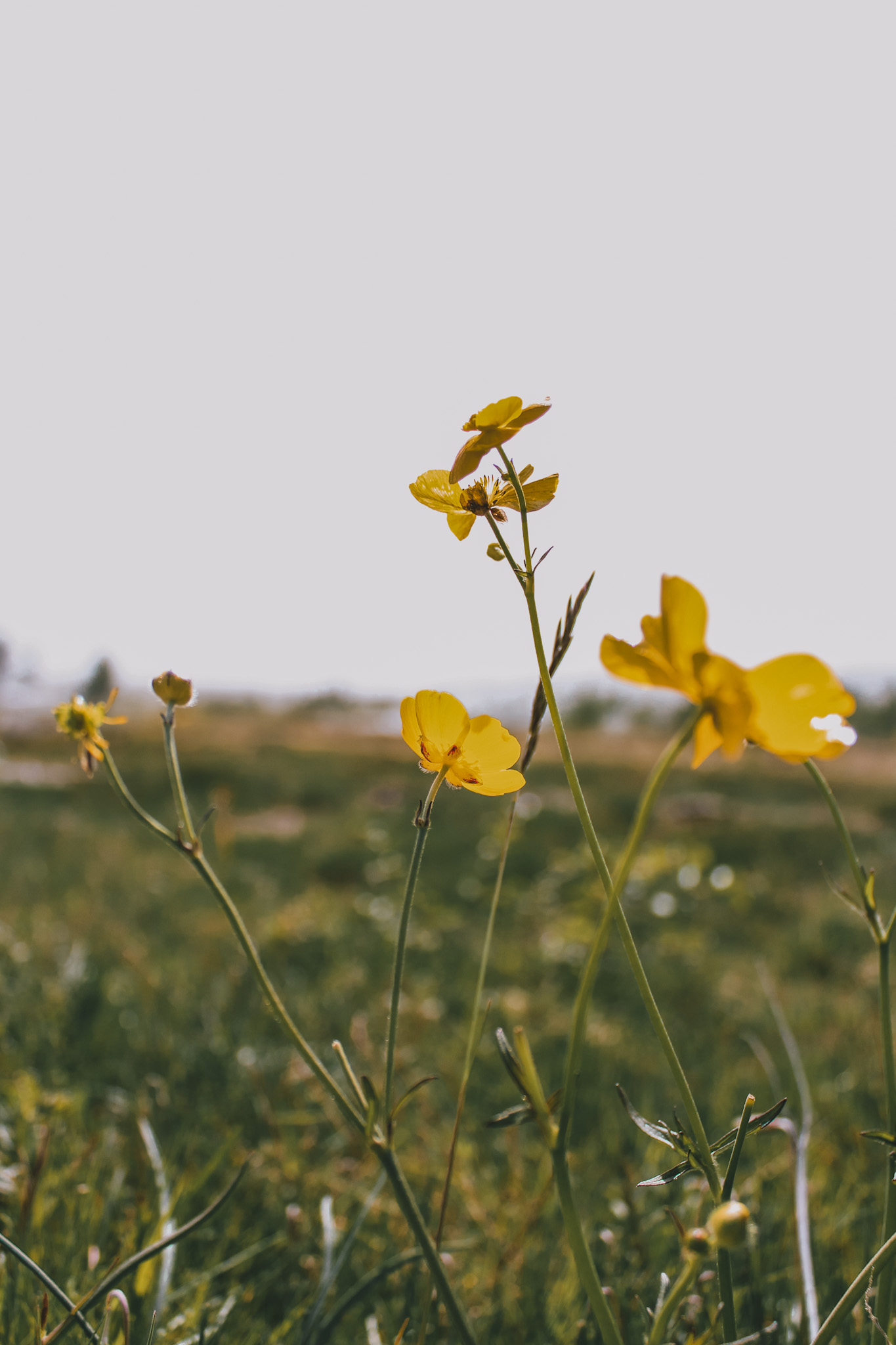 The Kerid Crater is usually an included stop along the Golden Circle, which is Iceland’s most popular tourist route. The crater is approximately 3,000 years old, which is actually quite young for Iceland. This explains why the slopes of the caldera are more red than black – the iron deposits are “fresh”. The crater has a lake at the bottom of it and is only 886 feet in circumference. It has a nice trail surrounding the top of it that fully encircles the crater, along with a path to descend down to the crater lake. I would set aside about 30 minutes here for the walk and photos.

The last site I visited during my layover in Iceland was the Blue Lagoon. This is arguably Iceland’s most popular attraction and despite all the tourist hype, definitely deserves a spot at the very top of your Iceland bucket list. After our long tour, we really only had like 30 minutes here before we had to return to the airport. Such a shame. I would set aside a full half day! It’s actually a full spa area – complete with changing rooms, showers, robes, face masks within the lagoon, and best of all – drinks. I wish I had more time here to really just enjoy the atmosphere instead of rush it. I’ll definitely be prioritizing a visit here next time I visit Iceland. 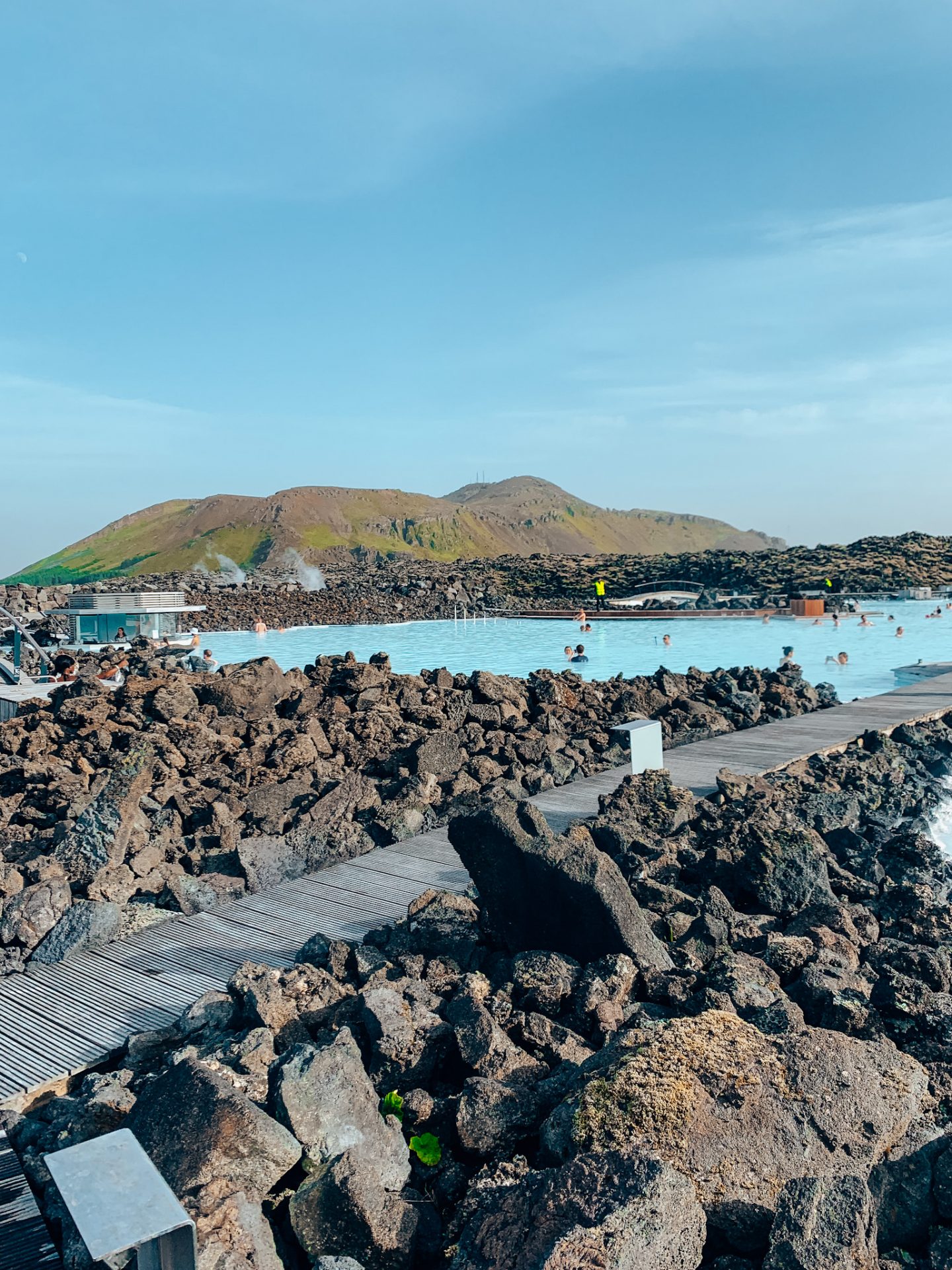 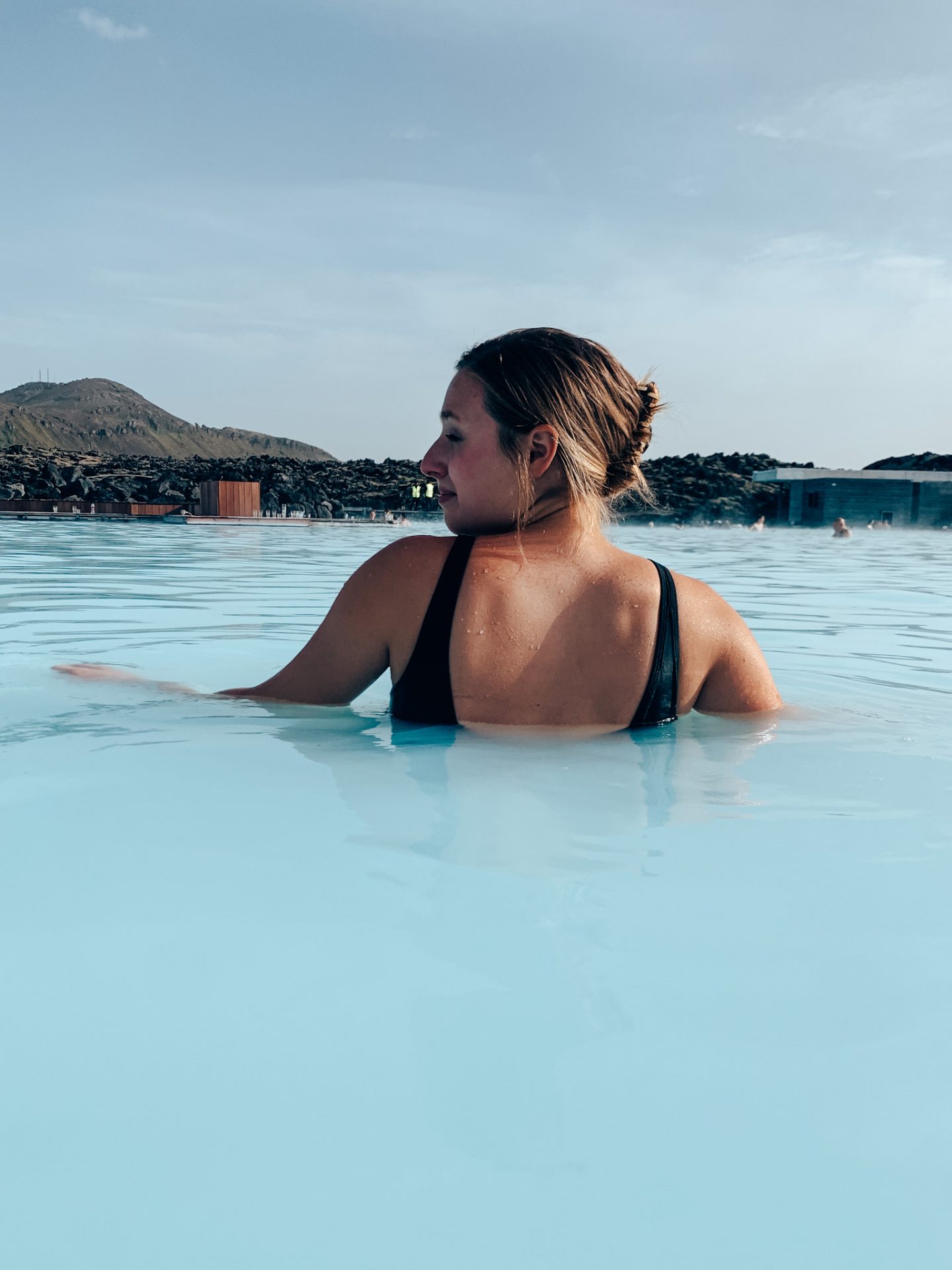 Pro-tip: We reserved tickets in advance through GetYourGuide. Since the Blue Lagoon is located only 20 minutes from the airport, it’s possible to book a roundtrip transfer and squeeze in a visit here during a layover from the KEF airport. 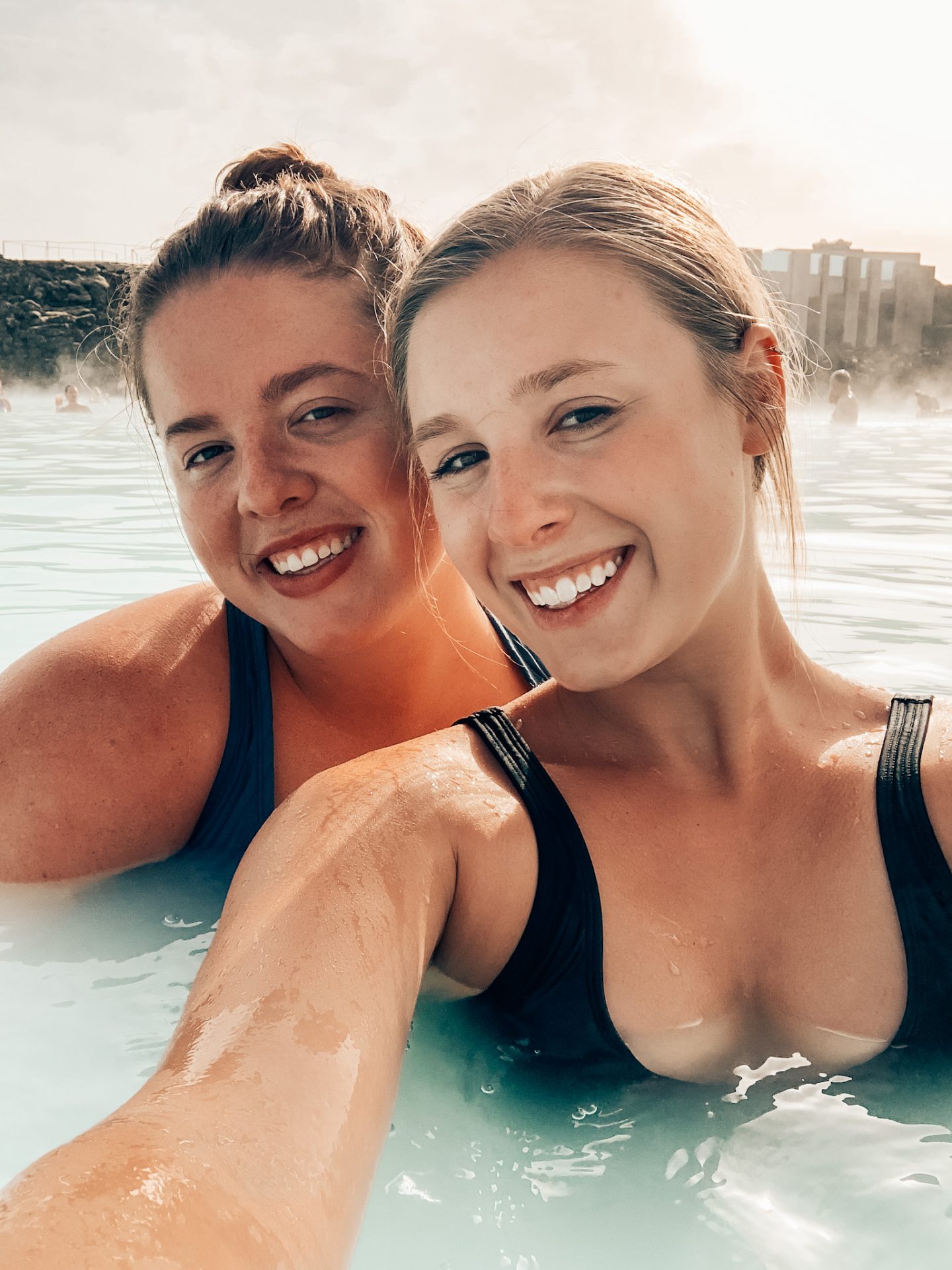 That concludes my Iceland travel guide! I hope this post helps answer all your “what to do in Iceland” curiosities and builds your excitement to visit the Land of Fire & Ice! Stay tuned for several more blog posts coming in my European Summer series. 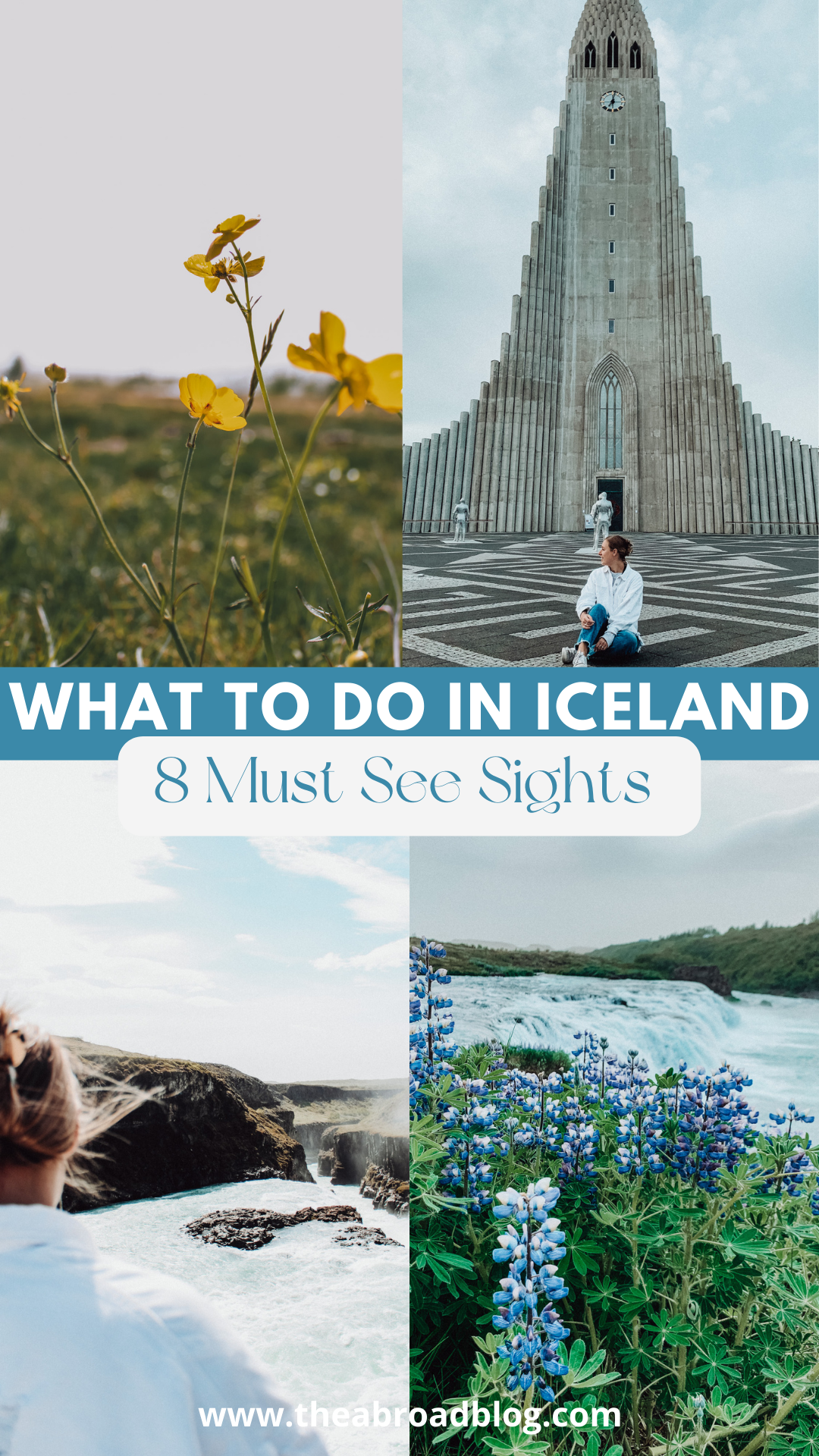