Australia should be a MUST on your travel bucket list for so many reasons. Not only do millions of tourists visit Australia each year, it’s become quite the popular spot for study abroad, so you will most definitely be surrounded by peers from all around the world. Also, Australia is extremely safe, making it a perfect destination to visit, or even live. Aussies are so nice and would be more than willing to help you in any way that you need since they are very welcoming to foreigners. There are also countless opportunities for trips Down Under, so keep reading to learn about some of them in this ultimate Australia travel guide!

A Background on Australia’s Geography

Most people highly underestimate the size of Australia, thinking it’s much smaller than the US. In reality, Australia is just as big as the US and continental Europe, although it’s a bit more barren. Most of Australia’s major cities are situated on the east coast of the continent. Here you’ll find Queensland – which is home to Cairns and the Great Barrier Reef in the north, along with the Gold Coast in the center, New South Wales in the south where Sydney is located, and the state of Victoria, which has the capital Melbourne. Then there’s South Australia along the southern coast. The center of Australia, called the Northern Territory, is home to one of the largest deserts in the world. It’s quite literally referred to by Aussies as the “Red Centre”. It’s also commonly called the Outback. This is where you’ll find Uluru, Alice Springs, and lots and lots of dingos… aka wild dogs you should probably stay away from. 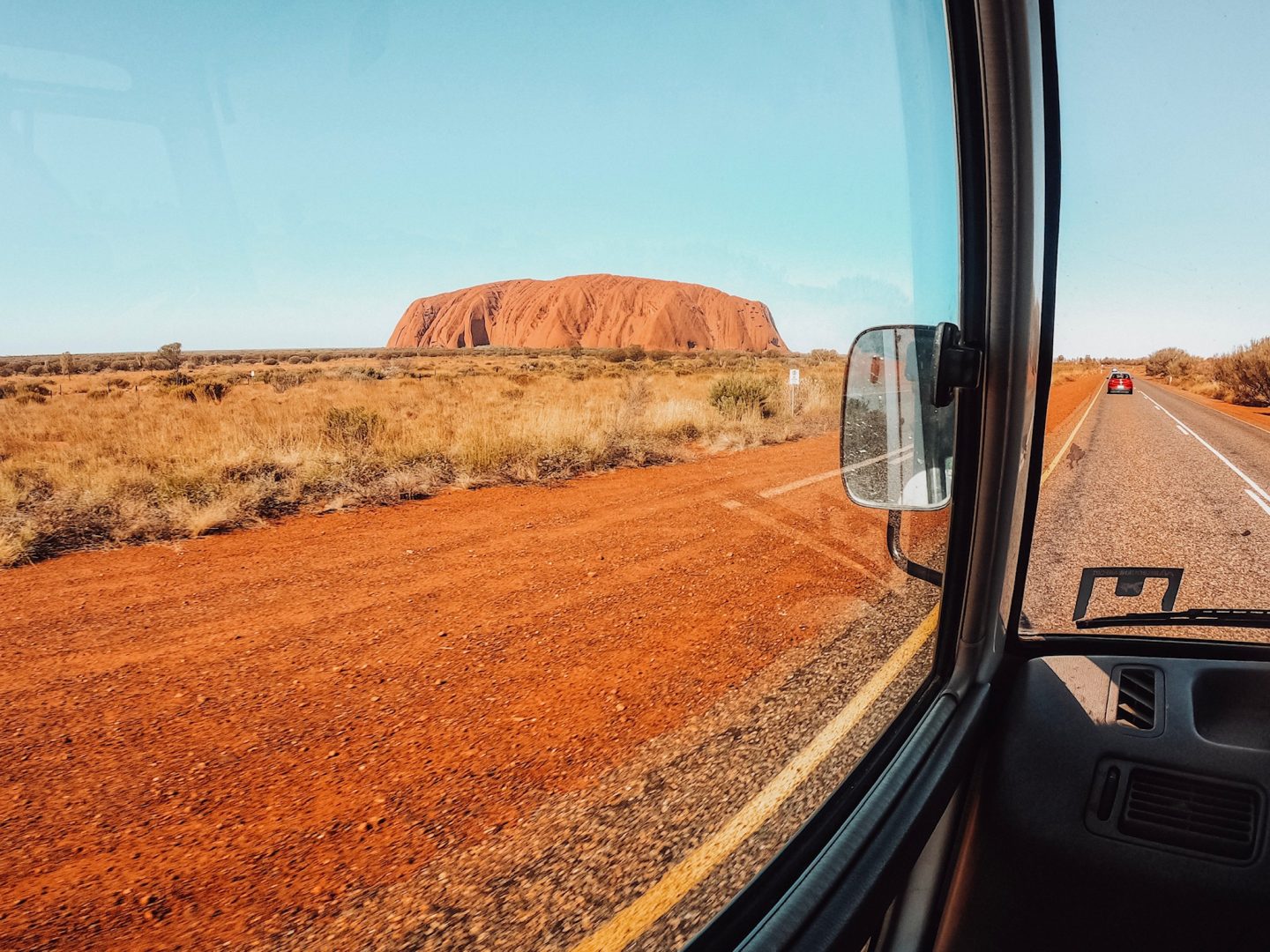 Australia’s west coast is dominated by the state of Western Australia and is home to only one major city, Perth. But, there’s a ton of natural beauty on this coast including pink lakes, sand dunes, Australia’s most stunning beaches, and the world’s happiest animal, so don’t skip it! Tasmania is an island off the coast of South Australia is home to the capital city Hobart, Tasmanian Devils, and some of the best wine in the world. The last tiny little territory is the ACT, or the Australian Capital Territory. This entire state is pretty much filled with Canberra, Australia’s capital. I visited all 7 territories during my semester abroad in Sydney and this Australia travel guide is going to cover how you can too.

Weekend Trips You Should Take In Australia

I spent the majority of my time studying abroad Down Under in Sydney, so let’s start there! Sydney is a huge city. Like HUGE. It’s actually 7x the size of Paris, and I remember thinking Paris was huge. It’s very spread out, so while it’s not the most walkable city, it’s definitely doable in a weekend trip. The first can’t miss highlight you should see in Sydney is Circular Quay. It’s here that you’ll find the Harbor Bridge, the Sydney Opera House, restaurants, and shops! The Opera House is an active performing arts center, so to see the inside you’ll either have to book a tour or a show.

Pro-tip: You can actually climb the Harbor Bridge in Sydney! 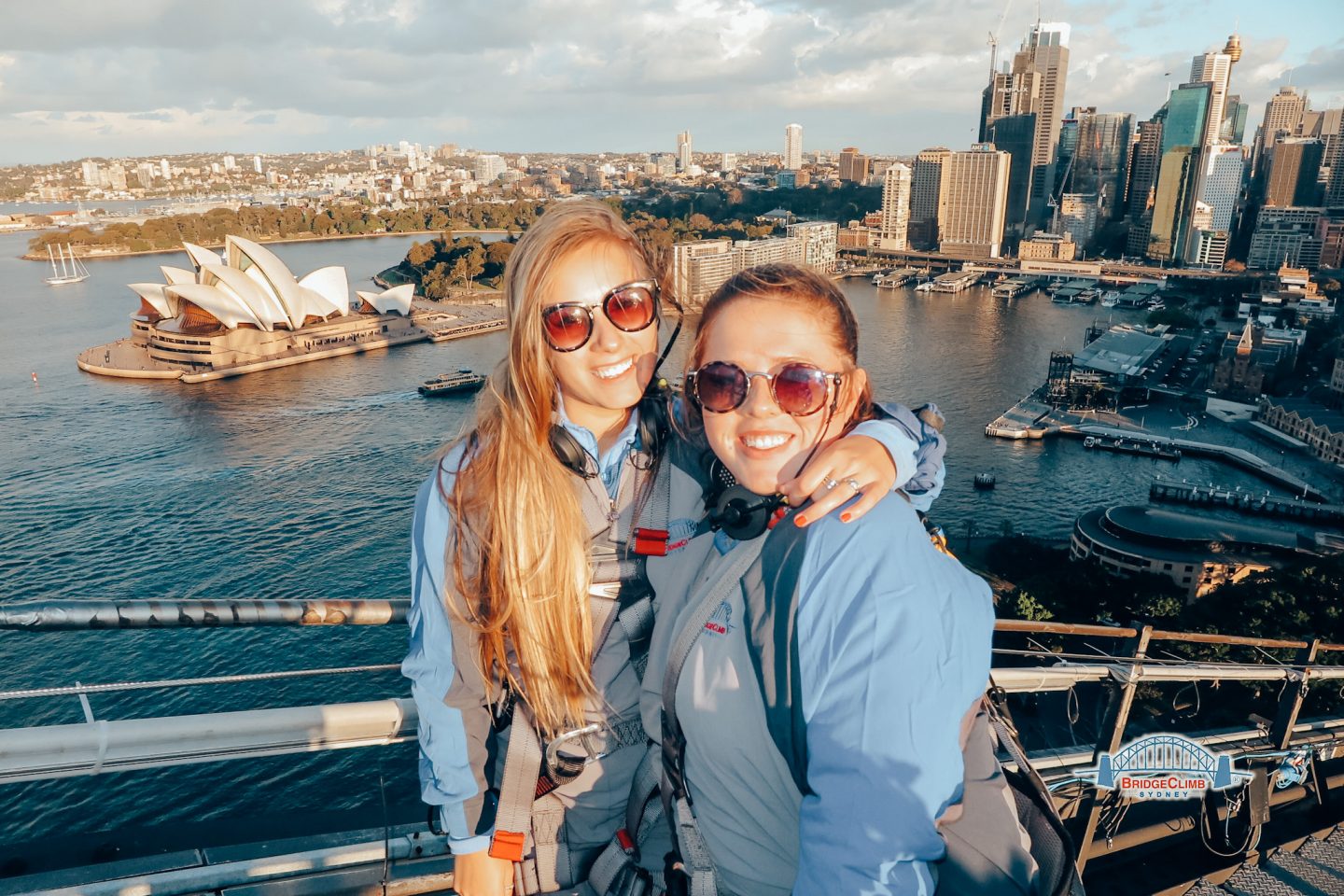 After you explore this area, you’ll have to see Bondi! This is the other famous area in the city, and is home to the famous Bondi beach and Iceberg pools. Anyone can swim in the Bondi Icebergs, but you’ll have to pay a small fee. Aside from these major sites, I also recommend exploring Manly Beach. To get here, you’ll have to take a ferry from Circular Quay, but it’s a great way to see the harbor as well. Manly has a beautiful beach, pedestrian walkway, and tons of shops and restaurants. In addition, make sure to visit Darling Harbor, home to even more shops and restaurants and Sydney’s aquarium. Like I mentioned, Sydney is huge so you’ll want to purchase an Opal Card so you can easily navigate the city via public bus or train. 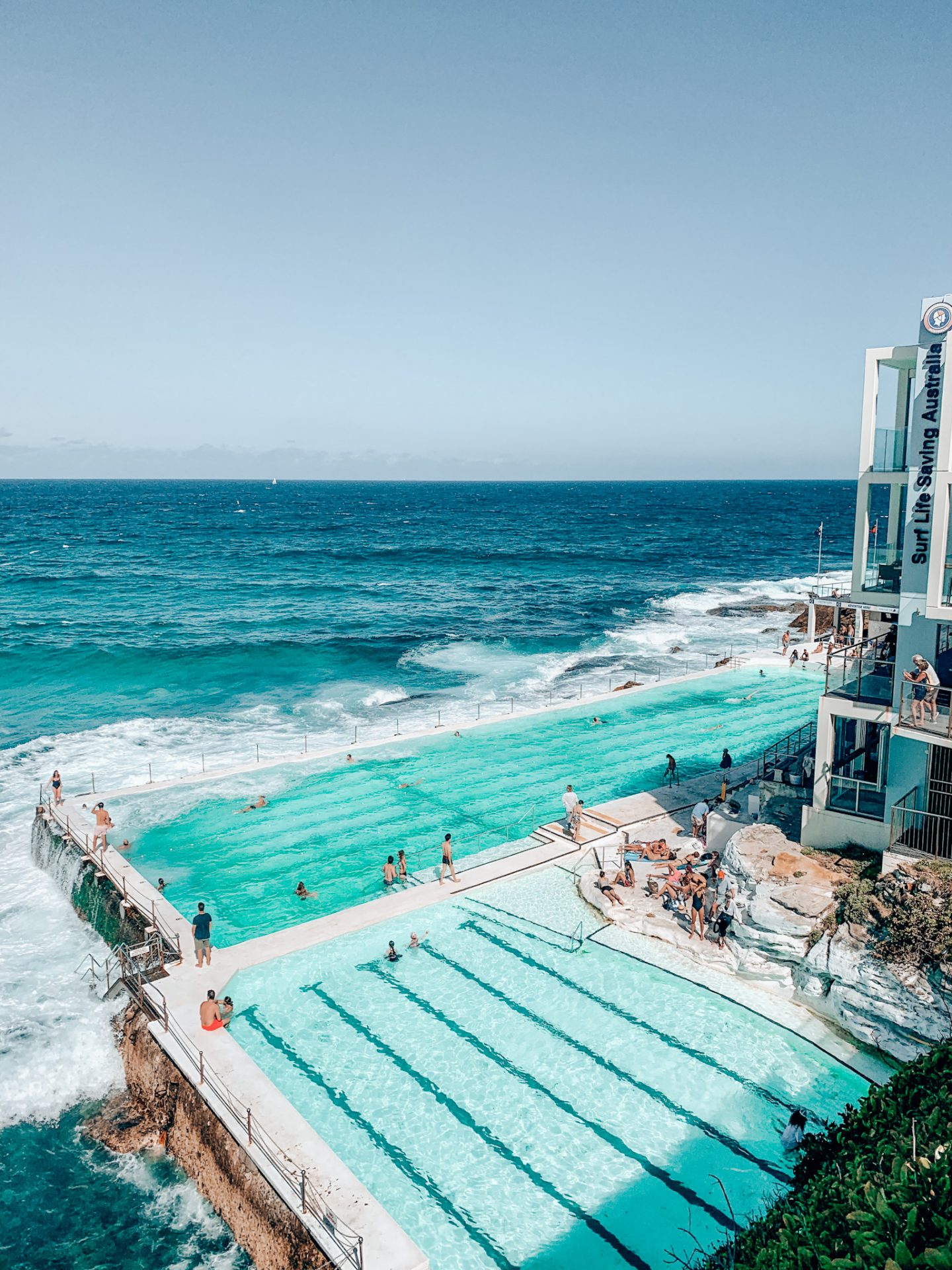 Another famous city to visit in Australia is Melbourne! Pronounced Mel-bin, this city is located in the state of Victoria. The city itself is known for its cafe culture and street art. Be sure to check out Hozier Lane, one of the most famous streets in Melbourne. It’s covered in graffiti art! During your weekend trip in Melbourne you’re also going to want to visit Brighton Beach, home to the famous colorful beach houses, and of course, the Great Ocean Road. The 12 Apostles along the Great Ocean Road are about 4 hours away from Melbourne. I couldn’t recommend exploring this area more, along with the nearby Loch Ard Gorge. This will definitely be one of the most scenic drives you take in your life and a top recommendation in this Australia travel guide. 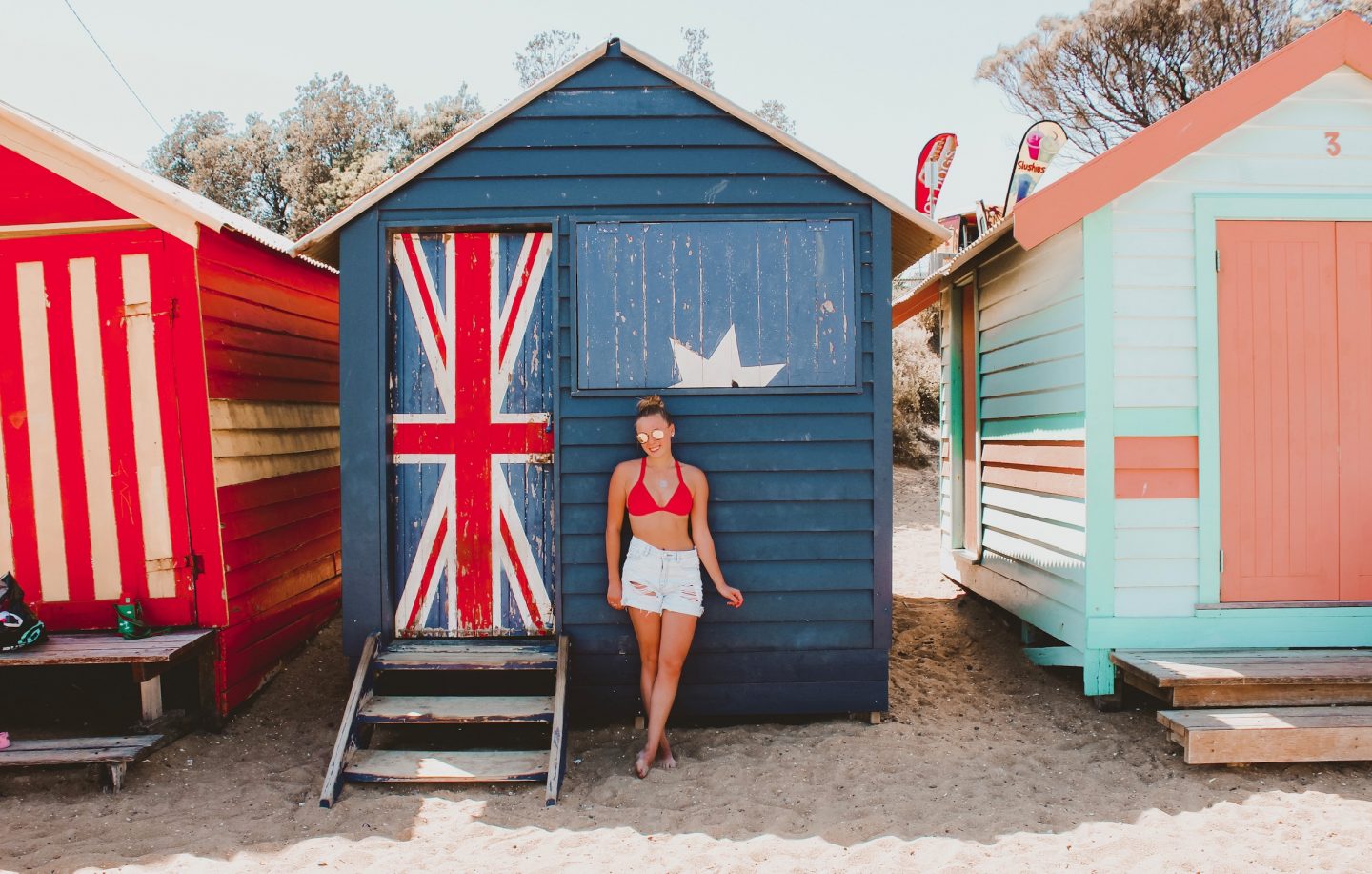 Queensland is probably Australia’s most iconic state as it’s home to the Great Barrier Reef, the Daintree Rainforest, and several major cities. You’ll want to take at least 2 separate weekend trips in Queensland. Starting up north, I recommend taking a few days to explore Cairns, Port Douglas, the Daintree Rainforest, and the Great Barrier Reef. Cairns is the largest city in tropical north Queensland and is a great homebase for adventure. I recommend staying at Gilligan’s Hostel here. It’s nice and super fun. Cairns doesn’t have a ton to offer, but there is a nice city lagoon that’s worth seeing. From Cairns, I recommend booking a tour (you can do this right at the hostel) to visit Port Douglas. Port Douglas is an hour north of Cairns and is where you’ll find a charming downtown and nice wildlife sanctuary. About another hour north is where the Daintree Rainforest is located. This is the oldest rainforest in the world and is home to the stunning Cape Tribulation beach and the famous Cassowary bird. You can visit the rainforest in one day. 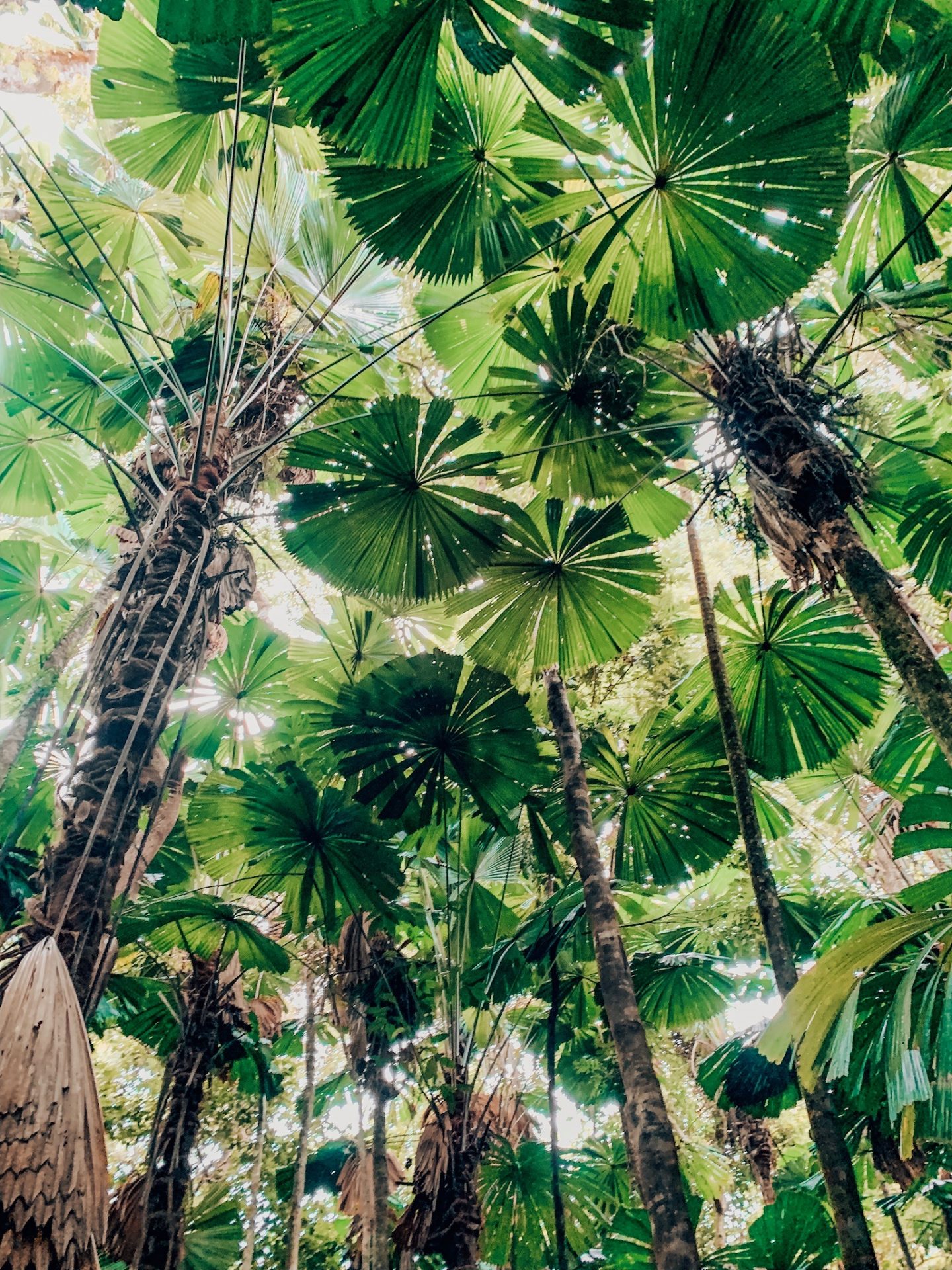 The next day, you’ll want to hit the reef! The Great Barrier Reef is ginormous, but the most popular part of the reef where people like to dive is located about 2 hours off the shore of Cairns. We booked the Passions of Paradise catamaran cruise, which was a full day excursion. It left early in the morning and sailed for two hours to our first stop and before we went scuba diving! We also had an hour to snorkel afterwards before eating lunch and driving to our second stop for another dive. The way home was very smooth and relaxing as the sun was setting and they passed out drinks! The Great Barrier Reef is the most alive, colorful ecosystem I’ve ever seen. You can’t leave Cairns, or Australia for that matter, without exploring the reef – this is a must on any Australia travel guide. 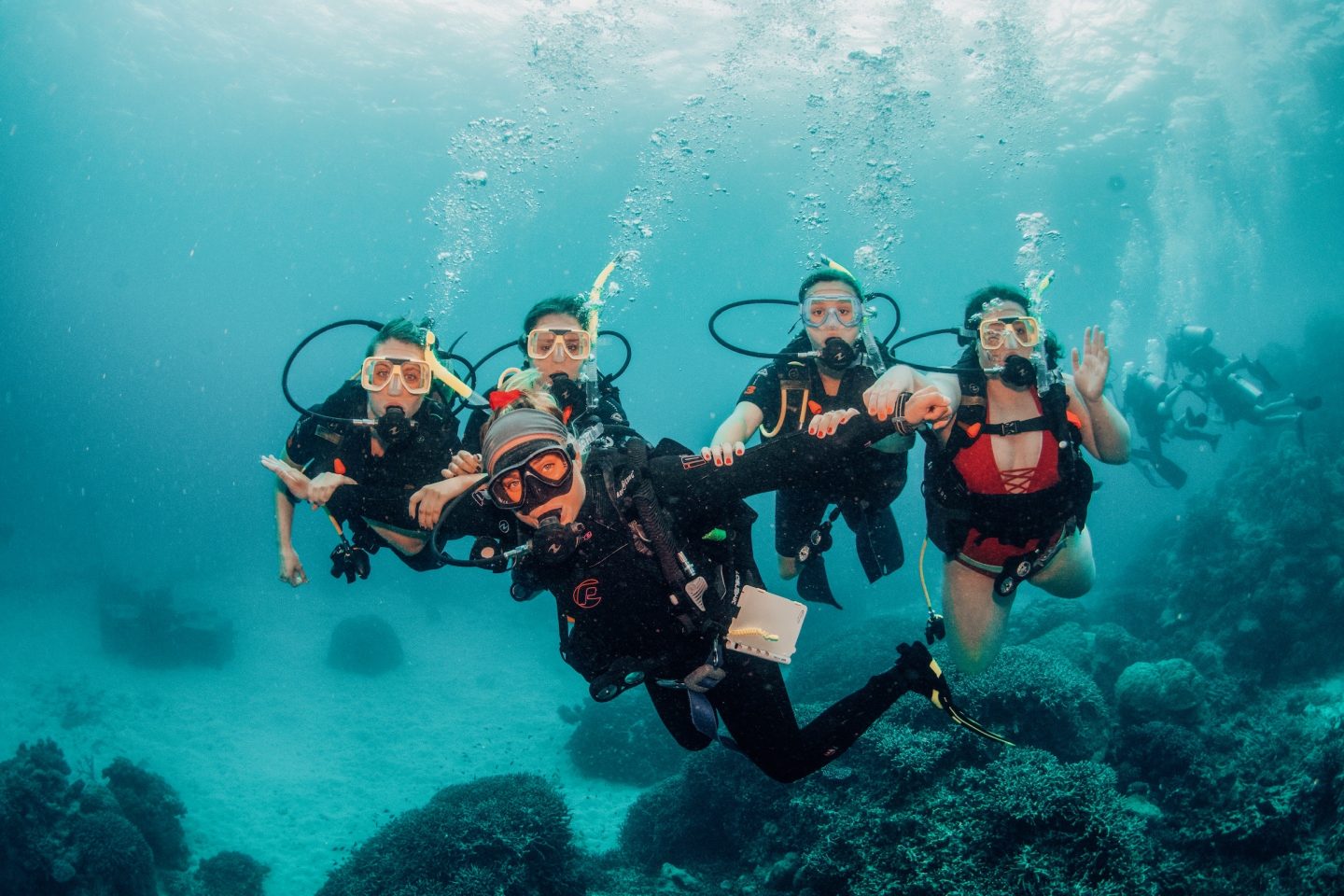 The second trip I recommend taking in Queensland is to cover the Sunshine Coast, Brisbane, the Gold Coast, and Byron Bay. It sounds like a lot, but this can be covered in about 4-5 days. You will definitely want to rent a car for this trip, as it will allow you to see more. Brisbane is the largest city in southern Queensland so start here. South Bank is the region in Brisbane where you’ll find a man-made beach and lagoon. It’s a nice area to walk around. Check out the markets here on the weekend! There’s also the nearby Lone Pine Koala Sanctuary, if you haven’t had a chance to hold a koala yet! There are several day trip options from Brisbane. I recommend driving two hours north to Noosa. This is one of the nicest vacation destinations you’ll visit in Australia. It’s very chill here and the beach is stunning. There’s also Fairy Pools here that you can hike to. 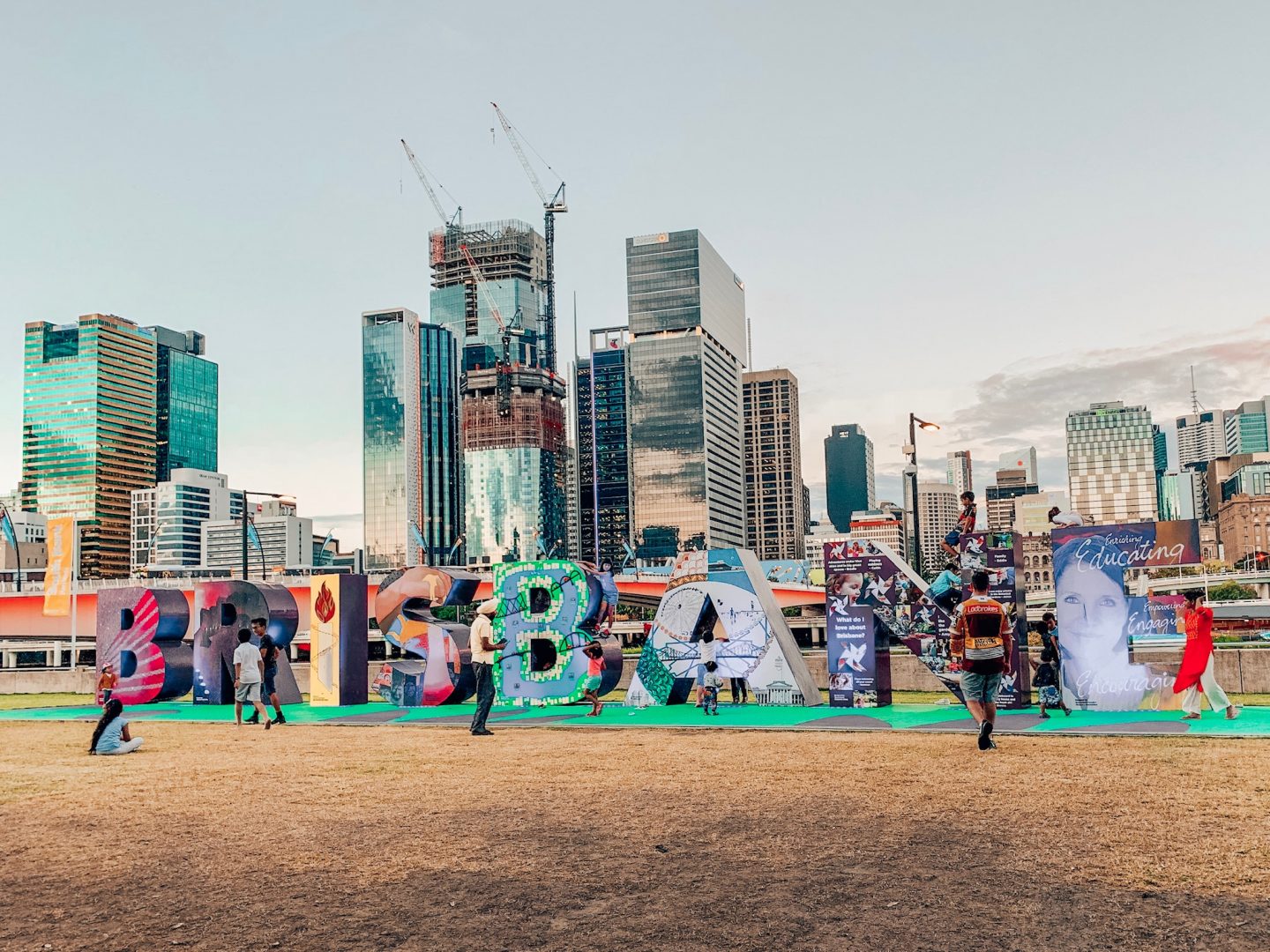 On your way back to Brisbane, be sure to stop in Beerwah, Queensland to visit the Australia Zoo! This zoo is owned by the Irwin family. Crickey! Remember Steve Irwin? The Crocodile Hunter? The family still puts on a show everyday at noon in the Crocosseum, so check it out! Next, head south to the Gold Coast! The Gold Coast is an area in Queensland covered in some of the most iconic surf beaches, but it’s also the name of a city. Gold Coast itself doesn’t have too much to do – it’s pretty much full of just high-rises and restaurants, but definitely check out the beach while you’re here! 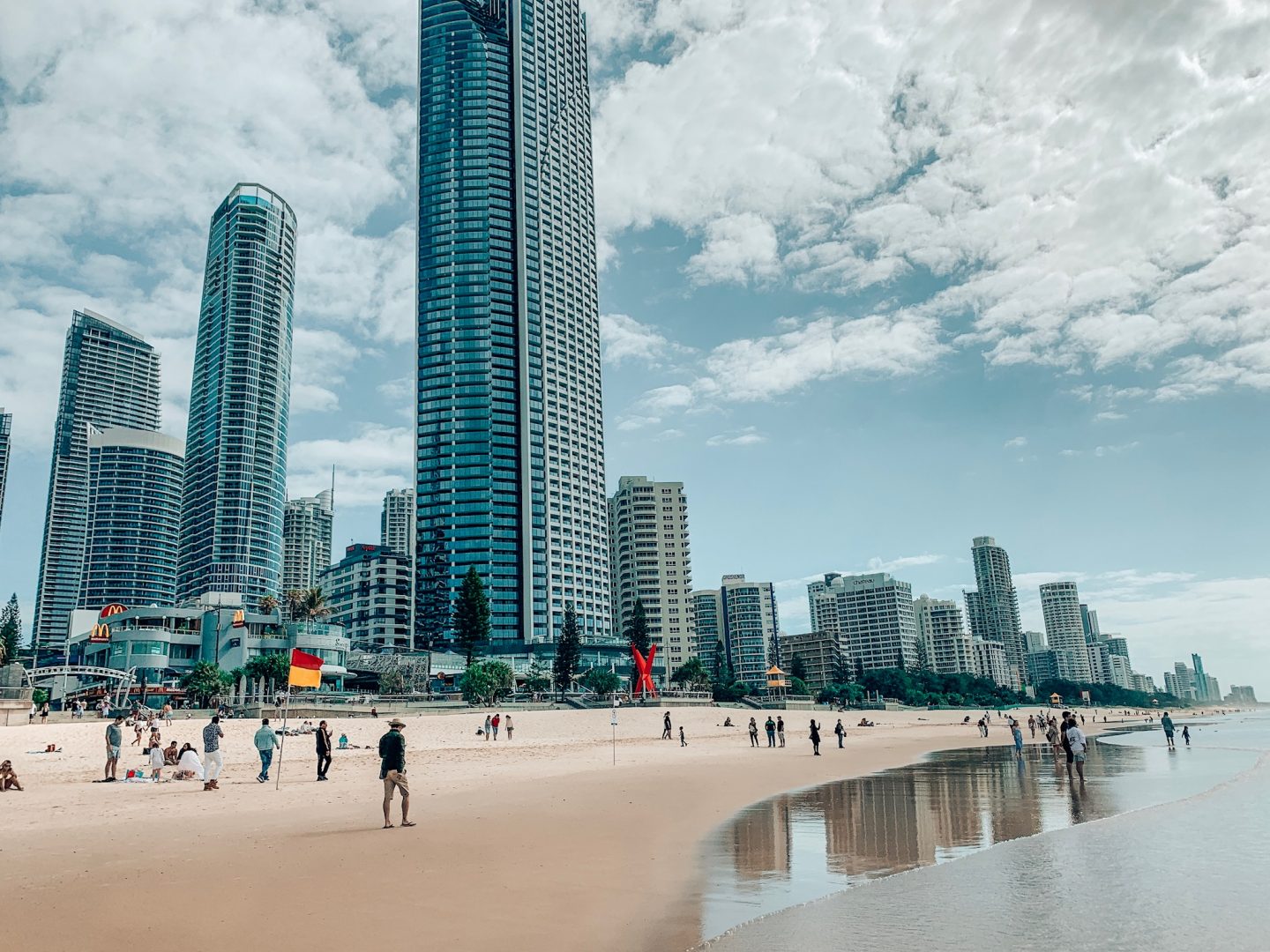 If you drive another hour south you will hit Byron Bay. Byron Bay is actually located in New South Wales, but it’s very close to Brisbane in Queensland. You need to stay here for a night! The only sightseeing to do here really is to visit the Byron Bay lighthouse. Other than that, I just recommend enjoying the beach and the cute little surf town. Feeling adventurous? Byron Bay is one of the most iconic places in Australia to go skydiving! If you want to learn more about that experience, check out my full article on everything you need to know about skydiving in Byron Bay. 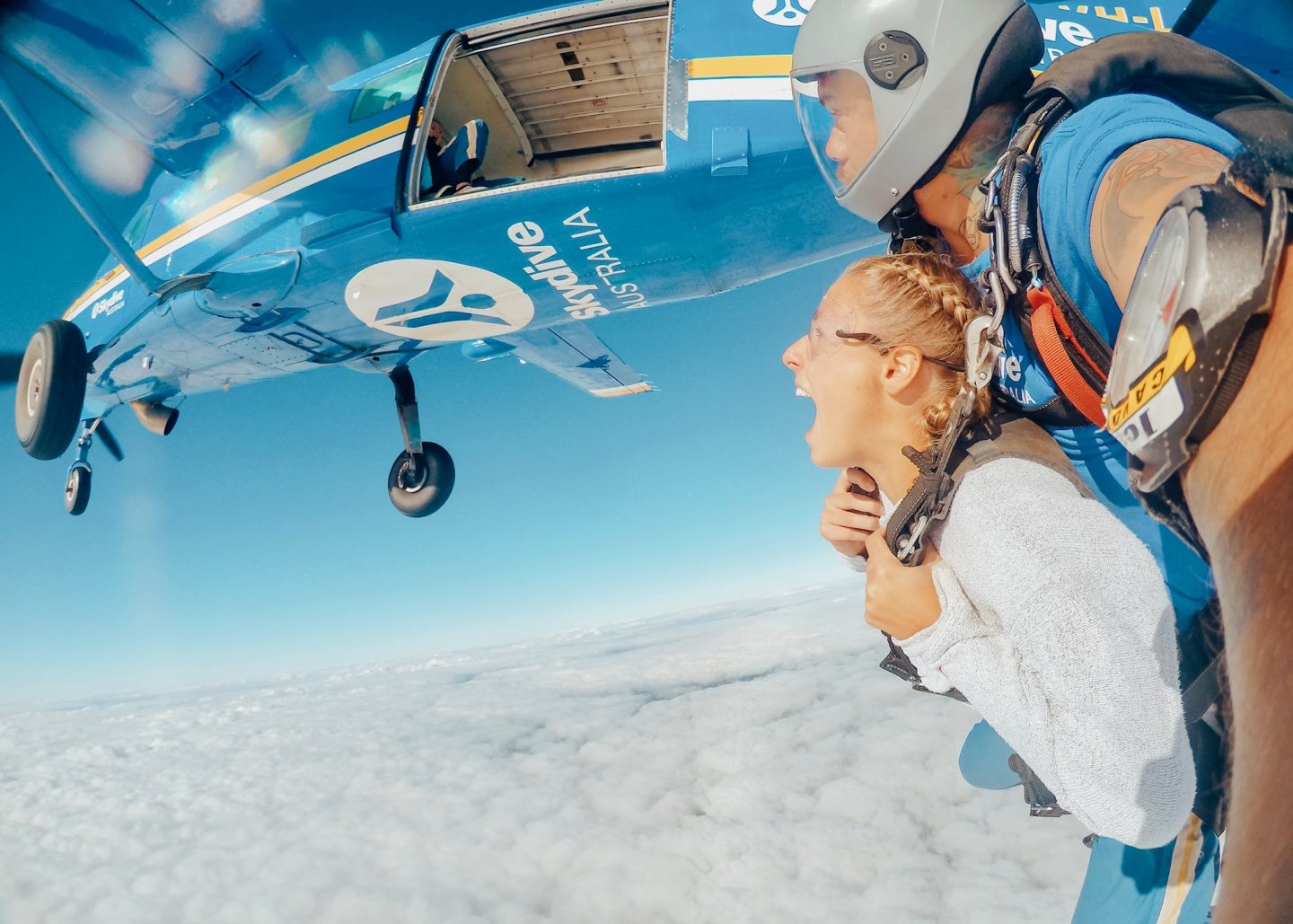 The last two trips I recommend in this Australia travel guide are Tasmania and the Outback & Perth. For Tasmania, you’ll want to fly into Hobart and begin your adventure there. Tassie is most famous for its natural landscapes, so the best way to explore is by campervan! This will give you the flexibility to explore anywhere you want. My friends and I did this for a weekend and it ended up being one of my favorite weekend trips in Australia. You can check out my 4 day Tasmania itinerary here! After exploring Hobart, you’ll want to head north to Freycinet National Park. This is where you’ll find the stunning Wineglass Bay! We challenged ourselves to a scenic hike overlooking the bay. Hiking Mt. Amos was the most difficult thing I’ve ever done, so I don’t really recommend it, but definitely find a spot to get a good view during your trip! I also recommend checking out the quaint towns of Richmond and Port Arthur, one of the most haunted towns in the world. 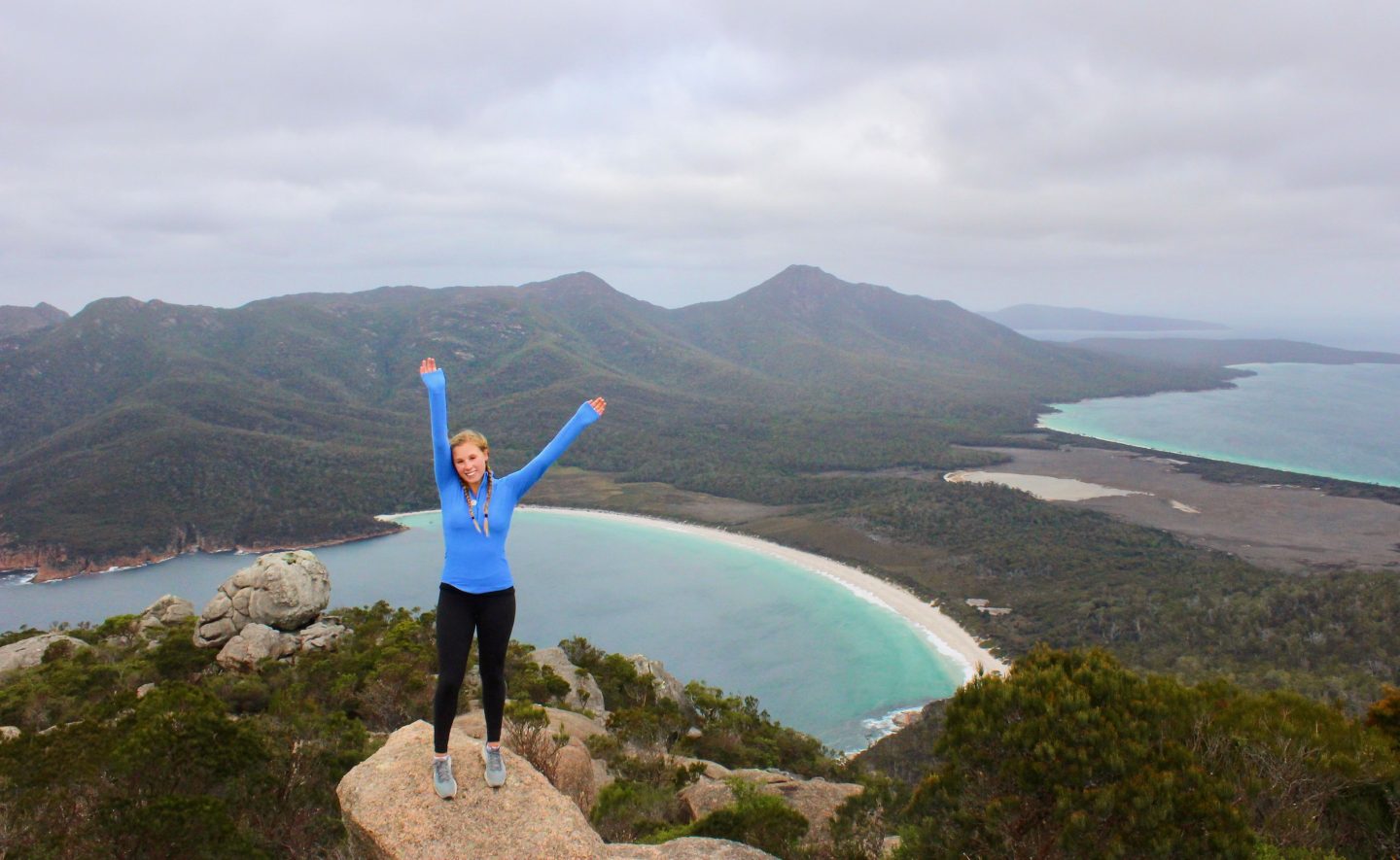 A lot of tourists overlook central and western Australia, but I think a trip to the Outback and Perth should be on everyone’s Australian bucket list. You can easily combine them by doing three days in the Northern Territory and then flying west for another 2-3 days in WA. For the Outback, I recommend booking the Rock Tour. This tour is perfect for both groups and solo travelers alike, and will bring you through Uluru, Kings Canyon, and Alice Springs. I did this trip alone towards the end of my semester abroad and had a blast camping in the Australian Outback! 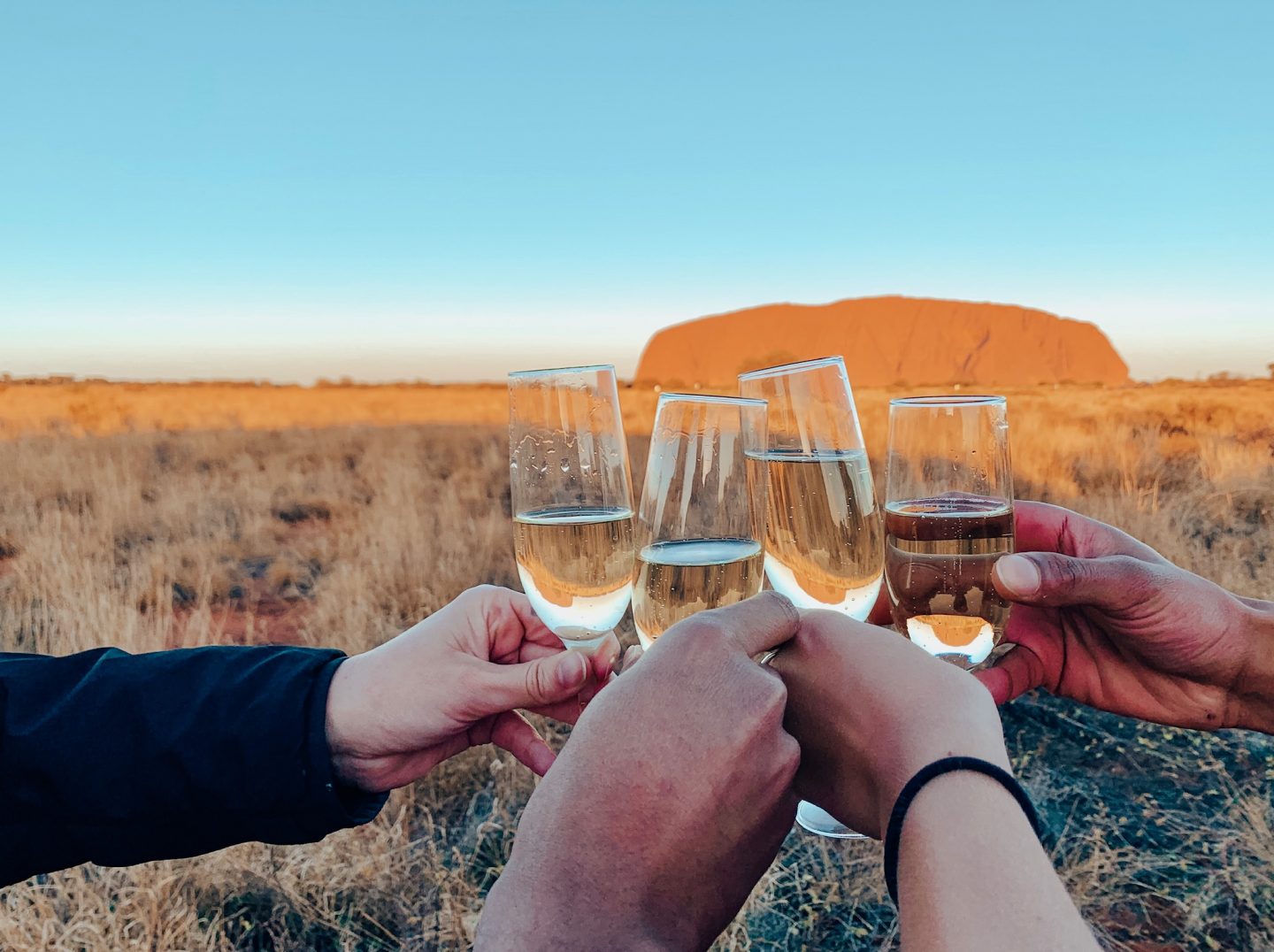 Once in Perth, I recommend setting aside a full day to explore the city, including visiting iconic locations such as Kings Park. You also need to visit Rottnest Island one day! This island is located 45 minutes off the coast of Perth and is where you’ll find the quokka, the world’s happiest animal. Rottnest is best explored by bike, so rent one for the day as soon as you step off the ferry. Don’t leave without capturing a selfie with one of these smiling animals! 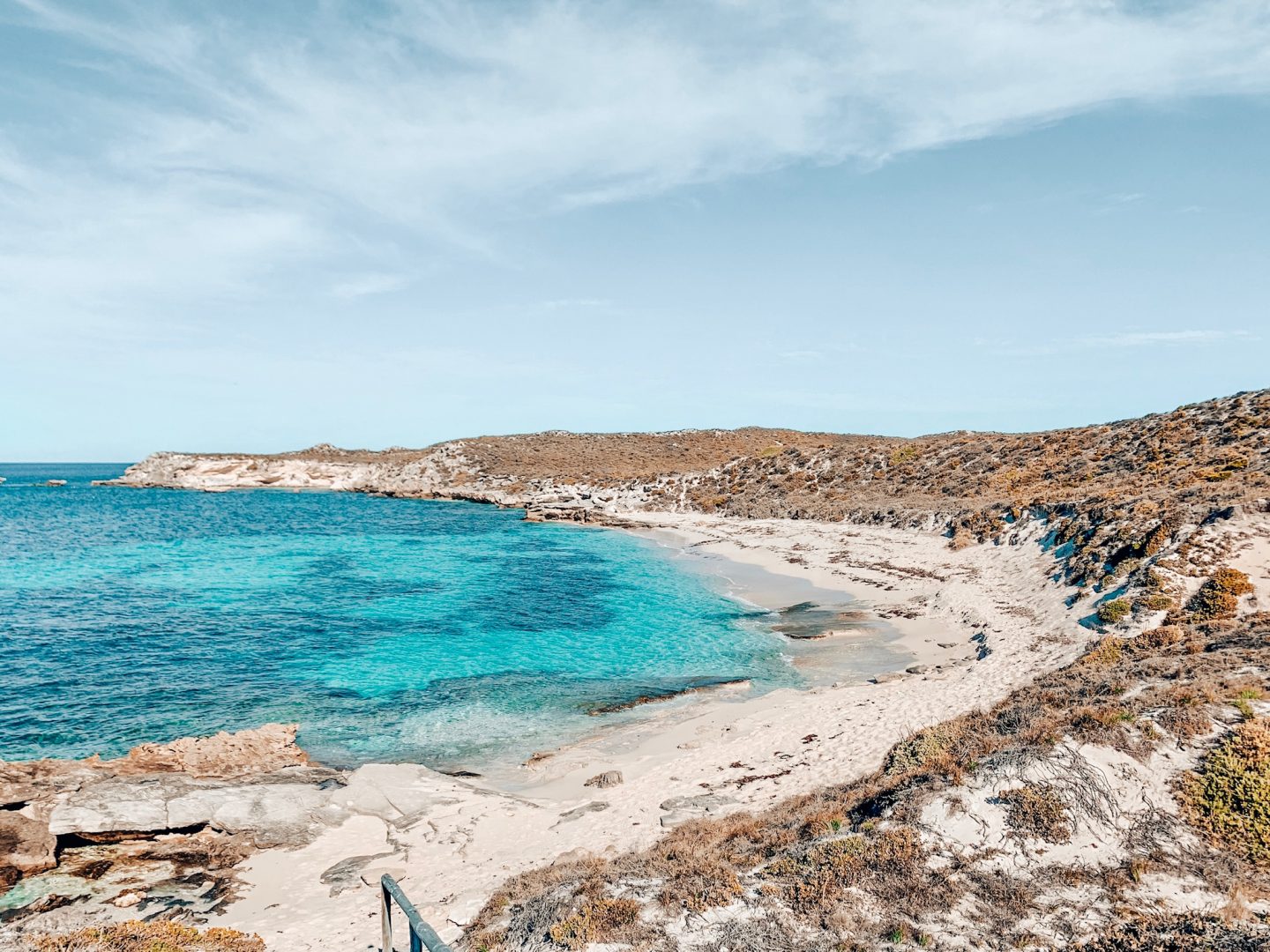 I actually did a few more trips around Australia during my semester abroad, including Adelaide and Kangaroo Island in South Australia, and sailing  the Whitsunday Islands in Queensland! As you can see, there’s so much to do here, but I just covered the highlights in this Australia travel guide.  I hope this Australia travel guide inspires you to visit and gives you some ideas for weekend trips to take. If you have any questions about Australia, feel free to DM me on Instagram @nicole.rosania. 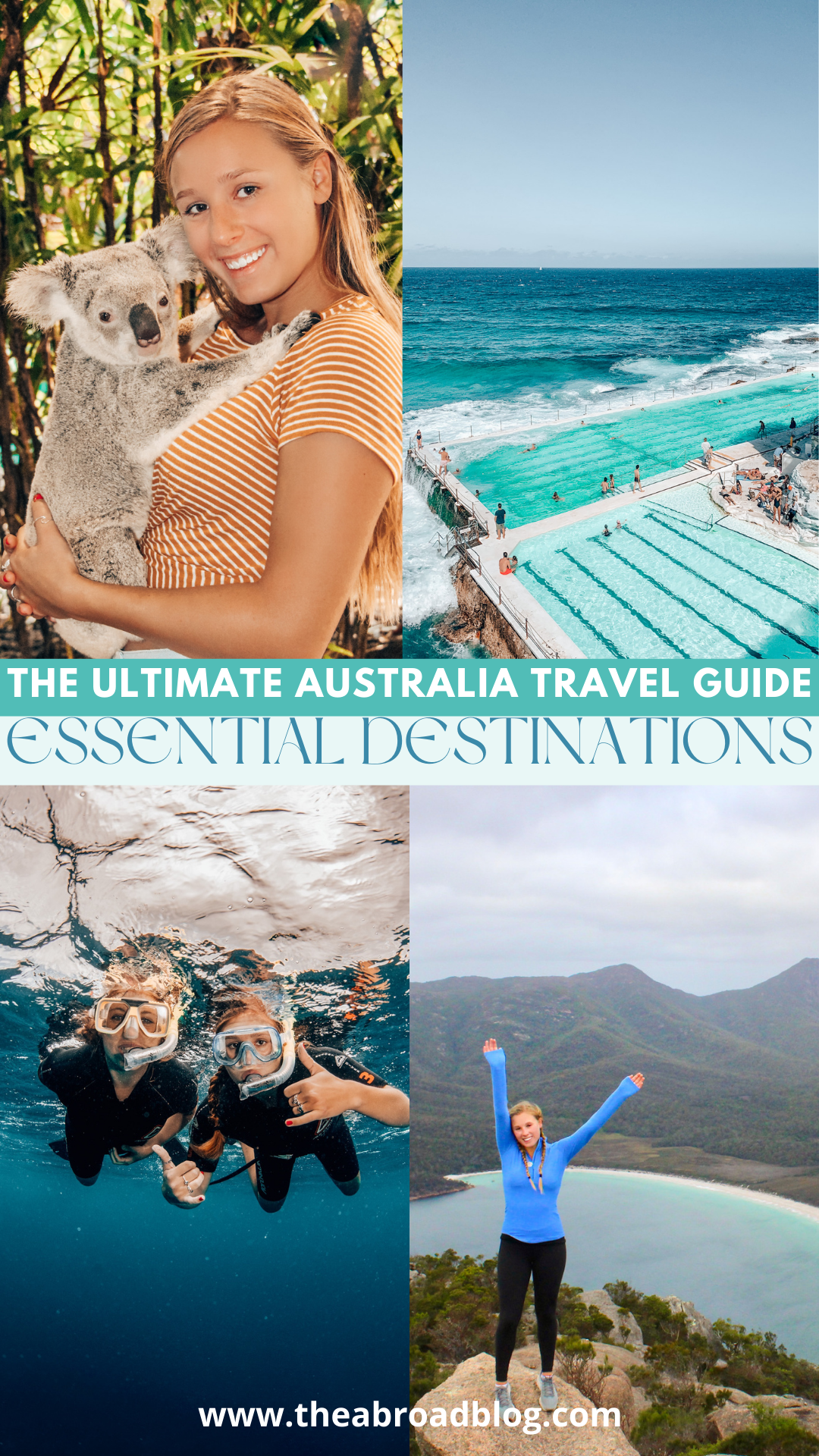